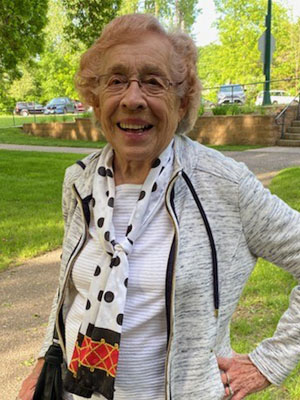 Lucille Hogan, lifelong resident of Jordan, passed away November 19, 2022 at the age of 94. She will be deeply missed by all who loved her.

A visitation will be held on Monday, November 28, 2022 from 4:00 – 7:00 PM at Ballard-Sunder Funeral & Cremation (104 First Street West) in Jordan. Mass of Christian Burial is Tuesday, November 29, 2022 at 11:00 AM with visitation one-hour prior at St. John the Baptist Catholic Church (313 Second Street East) in Jordan. Father Matthew Quail will preside, and Lucille’s grandchildren will act as pallbearers. She will be laid to rest at Calvary Cemetery in Jordan.

Lucille was born on the family farm in Jordan on March 27, 1928. She was the fourth of five children born to Peter and Catherine (Pieper) Stemig. As a girl, she helped on the farm and developed a strong work ethic. Lucille attended grade school in St. Joseph and graduated from Jordan High School in 1946. She was a lifelong resident of Jordan and always remained close to her many friends from Jordan and St. John the Baptist parish.

Always blessed with financial acumen, Lucille moved to St. Paul after high school where she worked for the Department of Taxes. After one year, she left her government job and moved back to Jordan where she took over her sister Clara’s job at NSP while Clara was on maternity leave. Lucille loved the work and spent the rest of her career with NSP managing the front office and providing help to thousands of customers in Jordan and surrounding areas.

Along the way, Lucille met a handsome lineman; his name was Malachi Hogan. She instantly liked him and often looked for excuses to “run into him” at the office. Mal, in turn, always offered to walk her to the post office when she had a big stack of paychecks to mail out. Finally, Malachi asked her out for a burger one night, and the rest was history.

On October 29, 1955, Lucille and Malachi exchanged wedding vows at St. John’s. They settled in Jordan and created a beautiful life in a home that Lucille’s dad and brother built for them. Lucille and Malachi’s marriage was blessed with three wonderful children, Anne, Carol and Tom. As the kids grew, the family enjoyed summer trips to lake cabins all around Minnesota. The whole family would tag along to whichever town Malachi was working in so they could all be together. Lucille also continued to work at NSP once the kids were in school. She was a hard-working and reliable employee for 33 years.

She loved her hometown and was also an active member of the Jordan community. She faithfully served her parish, its staff, and her many friends at St. John’s in a variety of volunteer and leadership roles for more than 60 years, including weekly financial service after Sunday Masses and helping with the Fall Festival each year. Lucille was a member of the Ladies’ Auxiliary and was at nearly all of the Jordan community events. She even found the Heimetfest Medallion in 2012. Lucille also enjoyed anything rhubarb… especially her homemade rhubarb wine. In her free-time and her retirement, Lucille enjoyed time with lifelong friends playing cards, going out to lunch, bowling, and more.

Lucille was always very active and had many interests; however, the most important thing in her life was her family. She treasured every moment spent with her husband, children and grandkids. Lucille taught many of her grandkids how to fish in the Mill Pond. Her favorite trips were spent either traveling with or visiting family in California and Florida. For her, time with family was an extension of her deep Faith and belief in others.

Offer Condolence for the family of Lucille Hogan