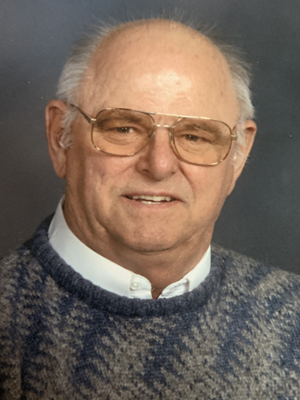 Loren Louis Hanel, loving husband and father of five, passed away on Wednesday, June 17, 2020, at the age of 90 in Belle Plaine, MN.

Loren was born on December 15, 1929 in Mankato, MN, to Bruno and Margaret (Statham) Hanel. After high school he served in the United States Army, stationed in Japan during the Korean War. On August 15, 1953, he married Marie R. Kringle in Rice Lake, WI. Together they raised two sons, Brian and Kevin, and three daughters, Jean, Deanna, and Tricia.

Loren and Marie started their family in Mankato, MN, where Loren was a cabinet maker before starting his career with the MN Department of Transportation (MNDOT). They relocated to Prior Lake, MN, in 1964 when Loren accepted a position as a bridge inspector for MNDOT, building what would be their home of 55 years. Loren and Marie raised their family on the same street as Loren’s brother Don and his wife Carol. Loren inspected bridges in the greater Twin Cities area until his retirement in 1987 after 27 years of service.

Loren was blessed with many talents including woodworking, painting, calligraphy, and lettering. For many years he operated a successful side business providing professional pinstriping and lettering services. His handwriting was impeccable; Marie would wonder who he had writing his letters to her from Japan.

Loren was passionate about living life and serving God. He loved golf and shot a hole-in-one three times. He was a man of habits including daily devotions, crosswords, sudoku, breakfast routines, and nightly popcorn. He loved music, especially Country & Western and hymns; even better if he was playing them on his harmonica with his brother Harold on his guitar beside him.  For years Loren was a faithful member of St. Paul’s Lutheran Church in Prior Lake where he served in the choir. He was unmistakable from the loft during Christmas services. Driven by his artistic nature, he had a fondness for hobbies such as stained-glass art and photography. He enjoyed photographing, feeding, and watching birds and squirrels. In retirement Loren grew to love his man cave enjoying many Vikings, Twins, and Gophers games there.

Loren will be greatly missed by many. He is survived by his devoted wife of 66 years, Marie, and his children, Brian (Joanie) Hanel of Marion, IA, Jeanine (Russell) Ryan of Altoona, WI, Deanna (Barry) Thompson of Wabasha, MN, Kevin (Laurie) Hanel of St. Croix Falls, WI, and Patricia (Jonathan) Torrens-Burton of Oronoco, MN. He is also survived by his brothers, Donald (Carol) Hanel of Prior Lake, MN, and Richard (Joy) Hanel of Mankato, MN, a sister-in-law, Mary Lou (Harold) Hanel of Portland, OR, a brother-in-law (and sister-in-law), Carl (Phyllis) Kringle of Rice Lake, WI, along with 11 grandchildren and 13 great-grandchildren and many nieces and nephews.

Loren is preceded in death by his father, Bruno, and mother, Margaret; his brother, Harold, and sister, Barbara.

A private family service honoring Loren will be held on Saturday, June 27, 2020. He will be laid to rest at St. Paul’s Lutheran Cemetery in Prior Lake with Rev. John P. Vaughn officiating. Military honors will be provided by the Prior Lake VFW Post 6208 Honor Guard.

Offer Condolence for the family of Loren L. Hanel