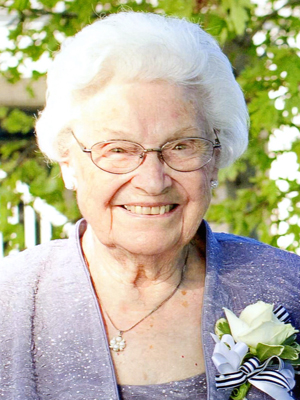 Leona A. Speiker, age 97 of Prior Lake, entered eternal life on Saturday, February 16, 2019. A Mass of Christian Burial will be held at 12 noon on Friday, February 22, 2019 with a visitation starting at 9:30AM, all at St. Michael Catholic Church, Prior Lake.

On May 4, 1921, Leona Ann Hentges was born on the family farm near Marystown to parents Jacob and Mary (Breeggemann) Hentges. Leona was the sixth of nine children to be raised in a German speaking household. It wasn’t until beginning school that Leona learned English. Along with her siblings, she walked nearly three miles to attend Marystown Catholic School.

Growing up during the Great Depression and the death of her father taught Leona many lessons—she quickly understood the importance of faith, family, and hard work. After completing the 8th grade, Leona began nannying in St. Paul. A few years later, she moved to Prior Lake to nanny for the O’Keefe family and waitress on the weekends. Later in life, Leona would run the Prior Lake Variety store and work at Lakeside Industries. She also cleaned homes until her retirement.

While nannying in Prior Lake, Leona met Anthony Speiker. On October 24, 1942, Leona and Anthony exchanged wedding vows at Holy Family Catholic Church in Columbus, GA. Not long after, Anthony was deployed. Unafraid to travel alone, Leona took the train to New York to see him off.

Leona’s life was blessed with a loving, tightknit family. Leona took pride in being a mother, grandmother, and great-grandmother! She helped raise her grandchildren and doted upon them. Her love of family extended beyond her immediate family. She was a family historian and loved chatting with her relatives.

Along with her family, Leona traveled extensively. She enjoyed going up north, visiting Europe, Panama, Canada, and other destinations across the United States. Leona enjoyed reading, embroidery, ceramics, cross stitching and was an avid card player—she played cards almost everyday of the week with her different groups! A dedicated woman, Leona was a charter member of the Prior Lake VFW Auxiliary.

Leona had a servant’s heart and was gracious to everyone she met. She was conscientious, classy, and truly devoted to her family.

There to greet Leona in Heaven are her husband, Anthony; son, James “Jim” Speiker; parents, Mary and Jacob Hentges; 7 siblings and their spouses.

Offer Condolence for the family of Leona A. Speiker