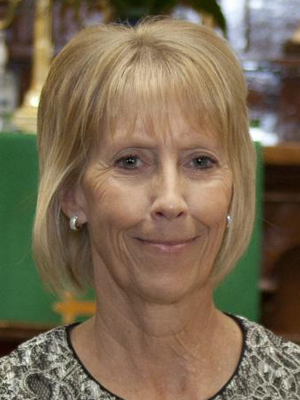 Laurie Herman, of Jordan, passed away suddenly on November 14, 2018 at the age of 59.  She was a wonderful woman and loved by so many.

A gathering of family & friends is Tuesday, November 20, 2018 from 4:00 – 7:00 PM at Ballard-Sunder Funeral & Cremation in Jordan.  Celebration of Life Service is Wednesday, November 21, 2018 at 2:00 PM with visitation one-hour prior at Hope Lutheran Church in Jordan.  Pastor Steve Thompson will preside, and Laurie will be laid to rest at Spirit Hill Cemetery in Jordan.

On June 16, 1959, Laurell Lee Peterson was born to Kenneth & Challotta (Goodrich) Peterson. Laurie’s family split their time between their home in Chaska and the family farm in Greenbush.  As a bit of a tomboy, Laurie loved the time spent on the grain farm with her siblings, Leslie, Mitchell, Kerry, Carolynn & Nancy.  It was there that Laurie’s lifelong love of horses began.  On the farm Laurie learned to work hard and play hard. Laurie led her siblings on many fun adventures on the farm.

Laurie graduated from Greenbush High School in 1977.  After school, Laurie stayed up north and helped her father around the farm and with his carpentry work.  Growing up with her mother being ill instilled Laurie’s selfless, caring attitude.

Eventually, Laurie moved down to the cities and began working at Fuller Labs where she met her eventual sister-in-law Donna. Donna set Laurie up on a blind date with her brother, Wes Herman.  They hit it off immediately…it certainly helped that Wes had horses.  Wes and Laurie exchanged wedding vows at a small family ceremony on October 10, 1981.  Laurie didn’t just get a husband, but she also got a daughter, Rachelle.  The following January, Laurie & Wes had another wedding for extended family and friends.  Laurie always loved having two anniversaries and two special days to celebrate their love.

Wes and Laurie settled in Jordan to raise their family.  They were soon blessed with two more children, Lindzey and Heath.  As a family, they enjoyed ice fishing, snowmobiling, and spending time at their cabin.  They took yearly trips to Florida to visit Laurie’s father.  When the kids were little, they had ponies & horses, and Laurie taught them all to ride.  When Wes & Laurie decided to open Herman’s Landscape Supplies, the horse barn had to go.  But Wes promised Laurie that he’d build her a horse barn again when she retired. A promise he fulfilled and Laurie was able to enjoy being a horse owner again.

Laurie was the hardest worker and could handle any job.  She helped with secretarial work, running the front desk & loading customers (even when she was pregnant!!!).  There was no job too big for Laurie.

When Laurie wasn’t working, she spent countless hours at Elko Speedway watching Heath race.  She also enjoyed gardening.  She was a wonderful landscaper and photographed her beautiful flowers.  Laurie loved mowing the lawn, and she had a very specific system for doing it just right.  Her malti-poo Zoe was Laurie’s sidekick for all of this.

Family was the most important thing in Laurie’s life.  She was a wonderful wife and mother, but her true passion was her grandkids.  She would do anything for her grandkids and loved to spoil them.  Every season she’d decorate the trails around their house so Wes could drive the grandkids through the magical scenes.  She loved getting all the kids together for movie nights or special getaways to Kamp Dels.  Laurie was the best grandma, and her grandkids filled her heart with joy.

Laurie was a true caregiver and was always looking out for others.  When Laurie suffered a brain aneurysm, her family knew that Laurie would want to help others.  Laurie’s final act of kindness was as an organ donor.  Her generous gift has already helped many others, and Laurie’s family is so proud of this incredible act.

Offer Condolence for the family of Laurie Herman