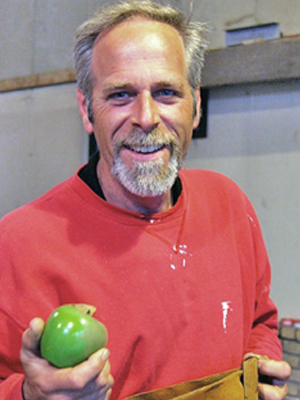 A unique visionary and driven craftsman, Kevin Thomas Breeggemann passed away unexpectedly on Friday, August 7, 2015 in Jordan, MN, at the young age of 52.

Kevin’s life will be honored with a time of gathering on Wednesday, August 12 from 4-8 pm at Ballard-Sunder Funeral and Cremation 104 West First Street, Jordan. There will also be a time of gathering starting at 9:30 am prior to the Mass of Christian Burial on Thursday, August 13 at 11 am, at St. John the Baptist Church 313 East Second Street, Jordan. Father Thomas Joseph will preside. Pall bearers will be his brothers, Randy, Fred, Russ and Joel and two best friends, Andres Basquez and Senor Evaristo (Baro) Espitia. Kevin will be laid to rest at St. John’s Calvary Cemetery, Jordan, MN.

It was on March 9, 1963 at St. Francis Hospital in Shakopee, MN, that Robert “Bob” and Deloris “Dellie” (Hames) Breeggemann held in their arms a precious boy, they named Kevin. The middle child of five, he grew up in rural Jordan on the family farm with his four brothers. As a young boy, Kevin became an individual who seen into all the different levels of a vision and beyond. At the age of 7, he was already designing homes by sketching them on paper for people to use in their blue prints. By the age of 12, this creative talent truly came to the fore front. Unbeknown to Kevin, this gift, this vision and this craft was his pillars in his own blue print in life.

Kevin approached the experiences of life with an eye for detail and a willingness to be self-taught. He loved everything he did, for it was never work. As a young boy, Kevin became an expert in planting and nurturing trees. He starting bagging groceries at Radermacher’s Market and after graduating from Jordan High School in 1981, he then moved into managing one of their stores in Prior Lake. At the same time, also being part owner of a limousine service. Wanting to expand his horizons, Kevin later bought his own grocery store in New Prague, where he eventually opened up a bakery and meat market just down the street. Serving customers by day and preparing the food by night. Needing to explore more in life, Kevin was very instrumental in bringing life back, by refurbishing two of Jordan’s historic buildings, the Nicolin Inn Bed and Breakfast and the Jordan Brewery. All while he was working full time building mansions and renovating homes in the Twin Cities area. Over the last years, Kevin’s passion was revitalizing and creating a new vision for the Minnesota Harvest Apple Orchard. There was always projects in the works and more ideas coming forth each day.

The mind of Kevin was always working; drawing up new plans and ideas, buying and fixing up historic homes, building furniture and painting pictures. In his free time, he enjoyed collecting antique cars, tractors and furniture. Kevin enjoyed all types of animals and in recent years was able to share this love with others at the apple orchard zoo.

Kevin was Kevin and always marched to a different drum. He saw into things and was excited to try something new. A remarkable and driven personality, Kevin’s days were always full with new adventures. He accomplished a lot in his short life and when things got tough, Kevin would quote one of his famous lines, “you just do it.” Our hearts are sadden by your passing, but we will love you to the moon and back each and every day!!

There to greet Kevin home in heaven was his dad, Bob Breeggemann.

Offer Condolence for the family of Kevin Breeggemann