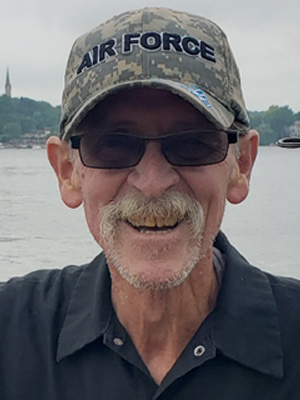 John N. Ries, age 63 of Jordan, passed away on Monday, August 12, 2019. Mass of Christian Burial will be held on Tuesday, August 20, 2019 at 11AM with a visitation beginning at 9:30AM at St. John the Baptist Catholic Church, Jordan. John will be laid to rest at Fort Snelling National Cemetery. Father Neil Bakker will preside.

On September 14, 1955, John was born in New Prague to parents Leander and Marie (Mayerhofer) Ries. He was the first boy in the family and the third of eleven children. John loved growing up in Jordan. He was adventurous and spent most of his time outside—playing baseball, running in track, fishing, squirrel hunting, and looking for agates. In high school, he was the front man for the band Purgatory Creek. John continued many of these pastimes into adulthood.

Following his high school graduation from Jordan in 1973, John enlisted in the United States Air Force. He was stationed in Germany and proudly served as a military policeman until his honorable discharge in 1978. Following this, he briefly lived in South Dakota where he worked as a carpenter.

A hardworking man, John was a truck driver for most of his career. Working locally in the south metro allowed him to spend time with his family. Most recently he worked for Wausau Supply Company, INC in Lakeville.

While living in South Dakota, John was introduced to a young woman, Cindi. They were married and settled in Jordan to raise their family. John shared his love of the outdoors with his children. They spent countless hours camping, fishing, and horseback riding.

In his free time, John played on the Brewers Baseball team and was a member of his work’s softball league. Never liking the confinement of the indoors, John enjoyed motorcycling and occasionally ventured to Sturgis. As an avid hunter, John would often listen to CDs of turkey calls while driving—it was his version of music on the radio! While turkey hunting was his favorite, he often went deer hunting too.

A man of strong faith, John instilled many Christian values in his children. He believed in kindness and helping others. John was incredibly social and could talk to anyone, anywhere, about anything.

John is greeted in Heaven by his parents, Leander and Marie Ries, and his infant brother, Joseph Ries.

Offer Condolence for the family of John N. Ries