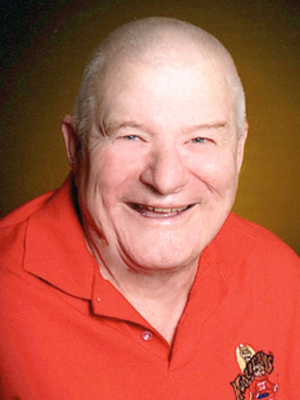 On May 9, 1937 in Gary, SD, parents Joseph and Armetha (Miller) Keimig celebrated the birth of their son, John. He was the fourth of fourteen children to be raised near Burr and Hendricks, MN. During his youth, John spent his days helping on the family farm. This instilled a deep appreciation for family and working hard.

During high school, John met younger schoolmate Claretta Kontz on the school bus. After several attempts of charming her, John finally won Claretta over. At the Church of St. Peter in Gary, SD, the young couple exchanged wedding vows on April 10, 1956. This union was blessed with 63 years of marriage and a loving family.

Following his graduation from Canby High School, John began working as a heavy machine operator for a road crew. In 1960, John’s job brought the family to the Prior Lake area. Soon after, he started excavating for Lawrence Schweich and Cy Schweich Construction. In his later years, John ran a pallet recycling business with his son Jeff.

When he wasn’t working, John enjoyed camping, fishing in Canada, and hunting in the Black Hills near Hill City, SD. With all six children in tow, the family often visited relatives in Canby and went up north to Farm Island. The family’s house was always a hub of activity! John made everyone—family, friends, and neighbors—feel welcome. A true family man, John was especially proud to be a grandpa and great-grandpa. He loved them deeply and supported them in any way possible.

John lived his life with strength, dignity, and faith despite many health setbacks and the devasting death of his grandson John Patrick Keimig. During the good times and bad, John relied on his faith in Jesus to carry him.

Offer Condolence for the family of John L. Keimig