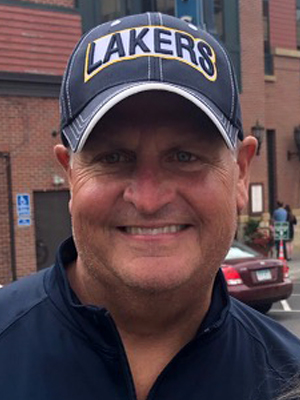 John Patrick Eggert, age 52 of Prior Lake, passed away unexpectedly September 8, 2021. A visitation will be held on Wednesday, September 15, 2021 from 4-6PM at Ballard-Sunder Funeral & Cremation Prior Lake Chapel (4565 Pleasant St. SE.) in Prior Lake A celebration of John’s life will be Thursday, September 16, 2021 at 11AM with a visitation 1-hour prior at Ballard-Sunder Funeral & Cremation Shakopee Chapel (833 S Marschall Rd.) in Shakopee. John will be laid to rest at Credit River Catholic Cemetery. Please dress in your favorite Vikings gear or colors to honor John.

In lieu of flowers, memorials are preferred and will be used to establish a fund for Abby.

On February 2, 1969, John was born in St. Paul, MN, to parents Joseph and Bea (Bakewell) Eggert. The middle of three children, John grew up in a tightknit family. His siblings had an inseparable bond—they laughed, loved, and bickered as only siblings can. John cherished time with his extended family as well. Dinners at Granny’s house with all the aunts, uncles, and countless cousins were John’s favorite.

Following his graduation from Cottage Grove in 1987, John continued his education at St. Cloud State University. While visiting his former dorm, John met Heather among a “crop of new ladies.” Despite mistaking her for an older student, the two became friends. Heather initially tried setting John up with a friend, but fate had other plans.

In 1994, John and Heather were united in marriage at Shepherd of the Lake Lutheran Church. They had many adventures together—snowmobiling, attending concerts, visiting the cabin with college friends, and traveling. One of their greatest adventures began with the birth of Abby, their daughter. John embraced fatherhood wholeheartedly. He was loving, fun, and spoiled Abby rotten!

A gregarious man, John had the gift of gab. No matter the place and time, John could strike up a conversation and make new friends. During his 30-year long career in computer sales, John cultivated meaningful friendships with his customers. His positivity was simply infectious. Along with friends, John enjoyed golfing, ice fishing, and cheering on the Vikings.

John’s life was defined by those he loved—his family, friends, and faith community at River Valley Church. John held a deep, abiding faith in Christ. He is now greeted in Heaven by his father, Joseph Eggert; father-in-law, Howard Clausen; and his loving grandparents.

Offer Condolence for the family of John Eggert