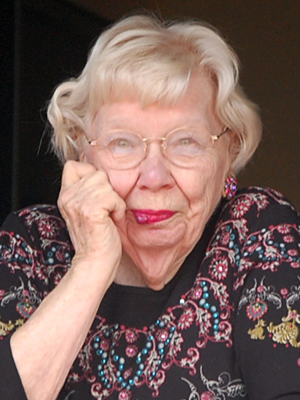 Joan Phyllis (Moskalik) Simons, longtime resident of Chaska (formerly of Santa Clara, CA), passed away peacefully on July 22, 2021 at the age of 92. She was a wonderful woman and will be missed by so many.

Mass of Christian Burial will be held on Monday, August 2, 2021 at 11:00 AM with visitation one-hour prior at Guardian Angels Catholic Church (215 West Second Street) in Chaska. Father George Grafsky will preside, and Joan will be laid to rest at Guardian Angels Cemetery in Chaska. Masks are required for all attendees.

On December 7, 1928, Joan was born to parents Joseph and Phyllis (Miloch) Moskalik in Minneapolis. She was the youngest of their five children. Always active, Joan enjoyed playing clarinet in the marching band and tap dancing.

After graduating from North High, she furthered her education at the University of Minnesota. She earned her associate degree in Education and began working as a first-grade teacher in Maple Lake, MN following her graduation.

While at college, Joan met the love of her life, Robert Simons at the Newman Center, on the U of M campus and their love quickly blossomed. Bob transferred to the University of Santa Clara for law school and they learned that absence truly does make the heart grow fonder. When Bob returned home during Christmas break, they became engaged and 10 days later exchanged wedding vows on December 30, 1950 at St. Phillips Catholic Church in Minneapolis.

Joan and Bob settled in Santa Clara, California. Their marriage was blessed with seven children, Colleen, Maureen, Kathleen, Kevin, Christine, Eileen and Bernadine. Bob graduated from law school in 1955 and began practicing law in Santa Clara. During that time, Joan was busy raising her children; however, she found time to be active with the Santa Clara Philharmonic Carmelite Monastery and St. Clare’s parish. In 1964, the Simons family returned to Minnesota to be closer to their extended family.

They settled in Chaska, and Joan was a wonderful homemaker. During this time, Joan was appointed by Governor Wendell Anderson to serve on the newly created Metropolitan Parks and Open Spaces. Four years later, she received recognition for her outstanding contributions to the commission. She was always so proud of the work she did helping to establish Cleary Lake Park, Nicollet Island, Lake Rebecca and countless other parks in the metro area.

Once their children were grown, Bob and Joan moved back to California in search of warmer weather. Joan was busy with her career as a home health worker for Eisenhower Hospital in Palm Springs, CA. while Bob continued to practice law.

After Bob passed away in 1991, Joan moved back to Minnesota to be closer to family. She lived at Waybury Apartments in Chaska for the next 20 years. Her home was always a gathering place for her family. Joan supported her family in their interests, especially their participation with Chaska Valley Family Theater. She often had meals prepared for her daughters and grandchildren the nights of their play practice and was a frequent “practice audience” for the theater.

She continued to work as a home health aide for the Waconia Ridgeview Hospital well into her 70’s. When she finally retired, it was all about family for Joan. By this time, she had many grandchildren and great-grandchildren. Joan loved being GG (Gorgeous Grandmother) to all of them! She always had a special love for children which she passed on to the next generations. Joan was a very good cook and her specialty was preparing meals for large crowds. Her table was never without room for one more.

Joan spent the last years of her life at Oak Terrace in Jordan. She always had a beautiful smile and a twinkle in her eye for anyone who visited and of course, her lips were adorned with her favorite lipstick “Cherries in the Snow”.

Offer Condolence for the family of Joan Simons