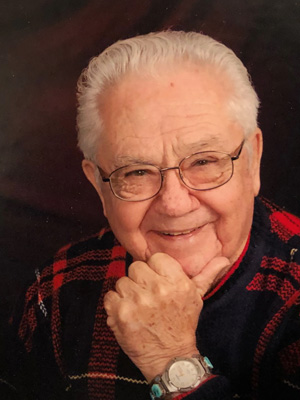 A drive through visitation will be held on Monday, June 1, from 4-7 pm, at Ballard-Sunder Funeral and Cremation, 4565 Pleasant Street SE, Prior Lake. A private family Mass of Christian Burial will be held on Tuesday, June 2 at 11 am, at St Michael Catholic Church, in Prior Lake. Public is encouraged to watch the live streamed mass by visiting stmichael-pl.org and clicking on the Live Streaming tab. Fr. Tom Walker will preside. Jim will be laid to rest at a private burial at St. Michael Cemetery, with military honors provided by the Prior Lake V.F.W. Honor Guard. Pall bearers for Jim will be Jim Cates, Chantz Cates, John Cates, Robert Cates, Mike Simon and Joel Klingberg. Honorary bearers will be David Caravalho, Ed Muelken, Mac McPherson, Duke Schrader, Tom Lannon and Howie Monnens.

On the small family farm in Prior Lake, James Maurice was born on July 12, 1934, to Earl James and Catherine (Simpkins) Cates. The sixth of seven children, he had those daily farm chores to complete, but Jim often found himself in mischief! He attended grade school in Prior Lake and since there was no local high school, Jim furthered his high school education in Shakopee. Here, he played football and was the co-captain of team. An excellent player, Jim was named the WCCO Half Back of the year, nicknamed “Hula Hips Cates” for his ability to evade opposing players to gain yardage. He graduated from Shakopee High School in 1952.

Jim proudly enlisted into the United States Army. From November 15, 1952 to August 16, 1954, he defended his country on the front lines in the Korean War. Jim was the recipient of several awards, such as Bronze Star and Good Conduct Metal (He must have behaved in the service!) This dedication and commitment to his country was expressed throughout his life. Jim was a lifelong active member of the Prior Lake V.F.W. He served in many capacities. Jim was instrumental in getting the first real bar installed, where he worked both sides of the bars for decades. He also completed maintenance tasks, served as the Commander, a member of the Honor Guard, and giving of his time and talent in the clubs weekly and yearly activities. The Memorial Day celebration always held a special place in Jim’s heart. He initiated the startup of the “Vet’s in the Classroom” in Prior Lake.  He spoke to over 12,000 students in the classroom for 20 plus years.

After returning from the service, Jim worked for the family construction business. In the mid 1960’s, he continued serving his country and community as a United States Letter Carrier. Jim’s career spanned over 30 years, retiring in 1990’s He also served on the National Rural Letter Carriers Union. Jim was not one to sit idle. He started Cates Clock Repair. Over many decades, Jim built and repaired thousands of clocks, of all types. It was entertainment in his life, yet Jim built a successful and unique business.

Jim married his high school sweetheart, Patricia Arnold, on December 29, 1956, at the Church of St Mary, in Shakopee, MN. Settling down just over the hill from where he was born, they raised five sons, Mark, Scott, David, Lance and Cory. The family spent summers camping around Minnesota, with many adventures out west and even to Florida. Life became complete for Jim as he became a grandpa. The grandchildren, great grandchildren and great great grandchildren brought him great pleasure. Jim remained active in their lives and enjoyed teaching them life lessons.

Ballard-Sunder Funeral and Cremation proudly served and cared for the Cates family.

Offer Condolence for the family of Jim Cates