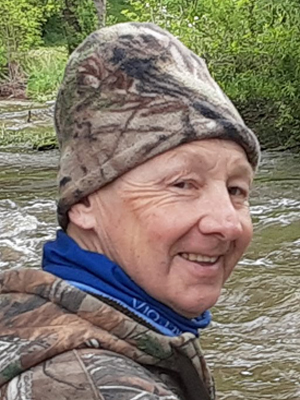 A time of gathering, honoring Jerry will be held on Friday, July 16, 2021 from 4:00-6:00 PM, with closing words at 6:00 PM, at Ballard-Sunder Funeral & Cremation, 104 First Street West, Jordan, MN. Following the closing words Jerry’s family would like to invite you to a light dinner gathering at the Jordan High School. 600 Sunset Drive, Jordan, MN.

On October 17, 1957, in Buffalo, MN, Milton and Rose (Ullman) Westphal welcomed Jerry Frank Westphal into the world. He grew up on the family farm in Monticello, MN. When he was not working on the farm, he was trapping, fishing, and hunting with his brother and friends. As a child Jerry enjoyed the days of listening to his father read Outdoor Life.

Jerry met Joanne at a mutual friend’s home on Christmas Day of 1979. Throughout the years, Jerry and Joanne shared many fond memories and lots of laughter with friends on the annual River Float, pool gatherings, and volleyball games. On June 24, 1989, Jerry and Joanne were wed at St. Michael Catholic Church, in St. Michael, MN.

In 1987 Jerry accepted a position as a palletizer for CertainTeed, in Shakopee. Jerry had a strong work ethic and spent the next thirty years as a dedicated employee. Through the years, Jerry was fortunate to travel to different plants in the US, training staff on equipment. Jerry continued to work up to his illness.

In 1992 their family grew with the birth of their beautiful daughter, Halie. She brought them so much joy. As Halie grew up, Jerry fostered a love of hunting and the outdoors in her by taking her on many hunting trips. A favorite activity, as a family, was cooking in the kitchen and baking banana bread. A love of all these activities were passed down to Halie.

Jerry was an avid sportsman. He loved sharing his passion for the outdoors with people of all ages, acting as a steward for future generations. Jerry was always in search of new techniques for hunting, trapping, and fishing. Through the years, he established many lifelong hunting and fishing buddies, and enjoyed traveling with them all over the country. He especially looked forward to his annual archery elk hunting trip starting in 1989.

In his later years, Jerry enjoyed taking walks and also collecting lures found around the Mill Pond. Many fond evenings were enjoyed hosting neighborhood fish fry’s where Jerry could be found shooting the breeze, telling stories and cracking jokes.

Jerry was certainly memorable. He was energetic, humorous, loved to laugh and down to earth. Jerry was a friend to all, impacting the lives of many. He will be greatly missed and fondly remembered.

Offer Condolence for the family of Jerry Westphal