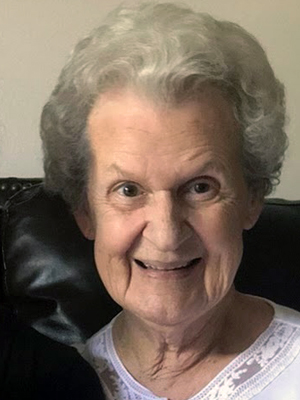 A Memorial Service will be held at 11:00 AM on Friday, July 8, 2022. Visitation time will be held half an hour prior to services at Ballard-Sunder Funeral & Cremation (833 S. Marschall Road) in Shakopee. Interment Fort Snelling National Cemetery.

Jan was born in Minneapolis on August 13, 1939. The youngest of three children, Jan grew up in St. Louis Park with her parents, Loran Sr. and Frances Phyle, and brothers Loran Jr. and Ronald. As a young woman, she loved to roller skate and bowl. Following her graduation from St. Louis Park High School, Jan was united in marriage to Eugene Byers in 1958. Soon after, they were blessed with two children, Debbie and Julie, and moved to Bloomington to build their family. In 1970, Eugene and Jan went their separate ways. She remarried soon after in 1971 to Eugene Poppe. Together, Jan and Gene moved out to the Prior Lake area where she became the head cook for Five Hawks Elementary School in Prior Lake. She left the school to run a shoe store in Burnsville Center, and then worked in the shoe department at Nordstrom in the newly built Mall of America.

Some time later, Gene and Jan bought land in New Prague, and Gene began building their dream home- entirely by hand. Jan was so proud of their home, particularly the walk-in closet Gene built for her for all of the clothes and shoes that she accrued while working at Nordstrom’s! Over the years, Jan liked to sew, making clothes for her daughters when they were younger; and moving to tablecloths, doilies, and other items. Jan and Gene enjoyed needlepoint as well, and Gene framed many of the pieces they created. Late in life, Jan resided in Rivers of Life in Savage, MN. She loved the activities and community that was provided and enriched the last few years of her life. She was able to live in peace, build a special bond with her daughter, and be a part of a loving, caring community.

Jan’s family would like to extend a special thanks to the Rivers of Life community for the special care and attention that was given to her over those few years.

Offer Condolence for the family of Jeannette “Jan” Poppe