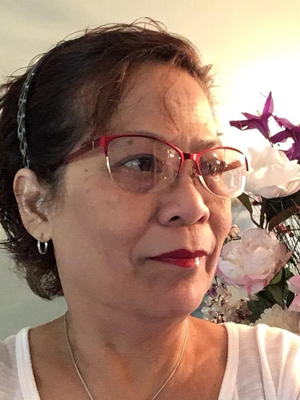 Jaruwan Olson, age 63, of Savage, MN, passed away on November 20, 2021 in her beloved home surrounded by her family. Private family prayers will be held to honor Jaruwan’s Buddhist faith.

Jaruwan was born on August 3, 1958, in Bangkok, Thailand to Sala and Somsri Boriboon. At an early age, she developed an appreciation of her tight knit family. She grew up in a small household, surrounded by aunts, uncles, and cousins. She grew particularly close to her grandmother, who played a significant role raising her.

Jaruwan moved to Hawaii to be with her mother and stepfather. From there she moved to California and was blessed with daughter, Anna, then moved back to Hawaii. While living in Hawaii, she met a young man named Scott Olson. After about a year, they were united in marriage on May 25, 1984 in Honolulu. Jaruwan and Scott were also blessed with a son, Scotty Jr. while living in Hawaii. They moved to Minnesota together as a family. Jaruwan attended school in Minnesota for administrative work and was a skilled typist, which ushered her into the career field of Administrative Assistant, and very soon moved up to the Executive Administrative Assistant level, typing about 160 words per minute. She enjoyed typing races with her daughter, and once they moved to Minnesota in 1990, the family settled in Savage in the famous “Purple House”.

Together, they enjoyed many camping and fishing trips, all over Minnesota. She enjoyed Lake Superior north shore the most. She loved to go agate (particular type of rock) hunting. Jaruwan always brought her portable pink TV along to make sure she didn’t miss her soaps. Jaruwan was a proud mother, supporting her children in all of their sports and interests over the years, particularly stepping up when Scott had to travel for work. They enjoyed trips to Valleyfair and Skateville, and celebrating the holidays together as a family. After her retirement in the early 2000s, Jaruwan became a Grandma and did her duty adoring and spoiling her grandson, Jayden. She loved visiting Chicago to spend time with him. Jaruwan was an excellent cook, making authentic Thai dishes and was able to put her own twist on any recipe making them one of a kind. She loved gardening and tending to her variety of flowers and plants. Staying active with yardwork was her way of working out and staying fit. Morel mushroom hunting was another thing she enjoyed.

Later in life, she tried the entrepreneurial side of business and dabbled in catering and was a big part of her son’s Esty store, making various handcrafted items. She cherished her time that she was able to travel with her mom, highlighted by their trip to Paris together.

She will be greatly missed by her husband, Scott; Children: daughter, Anna, her partner, Joy and their son, Jayden; son, Scotty Jr.; father, Sala Boriboon; brother, Santi Boriboon; sister, Weena Chiragul; and other family and friends.

She is preceded in death by her mother, Somsri Burnett and step-father, Charlie Burnett; and younger brother, Frank Boriboon.

Offer Condolence for the family of Jaruwan Olson