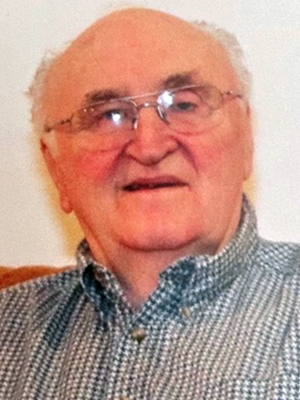 James G. (Jim) Ryan, age 83 of Savage, MN entered eternal life on September 13, 2021. All funeral events will take place on September 25, 2021 at St. Patrick’s Catholic Church (24425 Old Highway 13 Blvd., Jordan, MN). Visitation will begin at 9:30 AM and the Mass at 11:00 AM. Jim will then be laid to rest, and the luncheon will follow afterwards. Friends are encouraged to wear green in honor of Jim’s proud Irish heritage.

James Gerald Ryan was born January 23, 1938 in Minneapolis. Jimmy grew up with six older siblings on the Ryan Family Farm in St. Patrick’s, MN. He later moved to Jordan with his parents and spent some time working on his older brother, Bud’s farm. He played High School Football until lost a kidney from an accident while working on a construction project with his buddy at age 17. Jim enjoyed his time with the extended family and friends and shared many of those stories with his family. He loved to tell a good story or a joke.

Jim met Patricia Maus at a dance and within a year and a half they were married on August 24, 1957 in Faribault, MN. Jim and Pat soon started a family with the birth of Gerry followed by Gail, Lori, Chuck and Kelly. The family settled in the Prior Lake/Savage community, and they built several homes in the area over the years. Jim and Pat enjoyed vacationing in Northern Minnesota, Canada, Florida, Colorado and Montana with their kids. One of their most memorable trips was to the Emerald Isle, outer Banks in North Carolina where their entire family, kids, spouses and grandkids all stayed in one house for a week. There we all celebrated their 50th Wedding Anniversary. Just last month, they celebrated their 64th Wedding Anniversary.

Jim started working construction at an early age and eventually became a Cement Finisher. He was a card-carrying member of the Plasters and Cement Union and few years ago, celebrated receiving his 50th year card. He was a very ambitious worker and often did side work building creative fireplaces, patios, driveway and miscellaneous stonework. On drives with his family, he would point out buildings, schools, streets, parks and homes that he had worked on. These include the Big Sky Resort, Aloha Stadium and even the foundation for the former Vice President Hubert H. Humphrey’s gravestone monument that he was contracted to build. Jim was a Cement Finisher well-known specifically for the quality of his work. He was a teacher and mentor to many other Cement Finishers. When a knee surgery failed, he was forced to retire earlier than he wanted to. To his family, that was a concern because he hadn’t had time to develop a lot of hobbies and now, he would need something to keep himself busy.

He decided he wanted to try woodworking as one of his new hobbies. But just as he was getting started, he lost the use of one eye. That slowed his start but certainly didn’t stop him from moving forward. He read magazines like popular mechanics and built himself a scroll saw rather than simply buying one. He used the motor out of a copy machine, this piece from something else, etc. He explored different types of woodworking until he discovered the art of Intarsia. As it turned out, he was not only good at it, he was great at it! Intarsia is an ancient Italian technique of wood sculpturing. He displayed his work at various craft shows, County Fairs and Minnesota State Fair where he continued to be rewarded for his artistry. The people at Rockler Woodworking asked him to present the art of Intarsia to interested woodworkers. Once again, he taught and mentored other woodworking enthusiasts. His art pieces included Native American Chiefs, horses, eagles, dogs, birds, ducks, pheasants, golfers, religious crosses, roses and much more. A tiger he designed and carved was featured on the cover an August 2001 issue of the Creative Woodworkers and Craft Magazine.

In 1999-2000 the Savage Friends of the Library and Museum chose him to create six individual pieces of Intarsia to present a visual history of Savage. When presented, the Dan Patch Historical Society explained the significance of each piece. He later added additional pieces that are still displayed today at the Savage Public Library, including the piece which depicts a young boy sitting on a stack of books reading a book. That boy is his youngest grandson.

While Jim was not an outspoken person, he made friends very easily and always enjoyed a good conversation. He introduced two of his woodworking friends to each other and the three of them founded the Northstar Scrollers. A few years ago, the group, which continues to grow, celebrated their 10th Anniversary. He also enjoyed meeting with a coffee group at McDonalds on a regular basis.

Much like raising his own kids, his grandchildren and now great-grandchildren were something that he thoroughly enjoyed. He loved going to their games and events. Even watching many out-of-town games at home with family. He taught the next generations how to fish, woodworking and numerous life skills. Grandpa, or Papa, was their biggest fan and someone they all cherished.

Offer Condolence for the family of James G. “Jim” Ryan