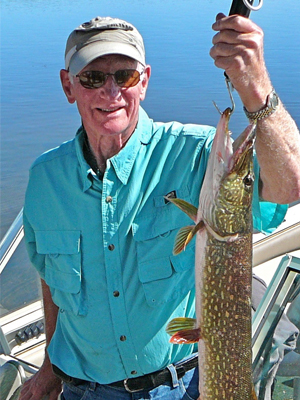 Jim Haning died a loved man on November 3rd at the age of 92.

Our dad was a kind and generous man who showed us his love every day. He built us doll houses, tree forts, and little kitchens. He came to every ball game and never missed a band concert. He taught us how to shed training wheels without fear – always there to catch us should we fall. He told us stories that were sometimes true, sometimes not, that often left us wondering. He preserved our dignity if we did something dumb, and he never lost his temper. He had a wonderfully dry sense of humor and always had a joke to tell. Dad could always make a bad day turn out good.

Dad loved the outdoors and everything in nature. His favorite place was “on a lake”. He loved to fish and made sure we were all properly schooled in the art. He planted gardens, even a separate one for the invading rabbits. He shared his tomato planting advice freely and had an endless supply of stories about growing up with his five brothers.

Our Dad taught us how to love God, be honest and do the right thing. He was very generous with his heart and offered it freely. Dad always put our needs above his own and made many sacrifices for his family. We never fully realized this until we were grown.

Dad was born on July 2, 1928. He was number four out of six boys born to Oliver & Nina Haning and grew up in the small town of Colfax, Iowa. His lifelong passion was music, especially Jazz. He played the drums. In high school, he formed a band with his buddies called “The Swing Zombies”. (He was ahead of his time!) Later on, his band became “The Dixieland Kids”. They toured Iowa and nearby states performing at barn dances and having a blast! He continued to play with dance bands on weekends for several decades afterward.

About 1950, Dad moved to Minneapolis to attend MacPhail School of Music. At 23, he began his career with the F.C. Hayer Company, an appliance distributor.  He met and fell in love with a girl who worked at a nearby record shop. That was our mom, JoAnne Myers. They were married in 1953 and started their life together in South Minneapolis. They moved to Burnsville in 1964 and raised the four of us kids.

After Dad’s retirement in 1993, he devoted himself to caring for our mom until she died (far too young) in 1995. Shortly after, Dad moved back to his home state of Iowa. In his retirement, he enjoyed spending time with his brothers and a friend from his youth, Roberta Forret. Dad and Roberta shared 20 years and many great times together. Dad returned to Minnesota in 2015 and lived the remainder of his very full life near his three girls and families.

The six Haning boys from Colfax, who ran, and played and fought with each other, are now reunited in Heaven. What a joyous reunion that must be! Now we eagerly await our reunion with the dad we love so much. Heaven is that much sweeter now.

A Celebration of Life will be held later when we can gather safely. Memorials may be directed to the Alzheimer’s Association. Cards addressed to the family can be mailed to Ballard-Sunder Funeral & Cremation; 104 First Street West; Jordan, MN 55352.

A special thank you to the wonderful staff at All Saints Senior Living, who became Jim’s  extended family. Also, to the Eden Baptist Church family, who always greeted him warmly and made him smile.

“Thou will show me the path of life: in thy presence is fulness of joy; at thy right hand there are pleasures for evermore.” (Psalm 16:11)

Another verse that may bring you comfort is 1 Thessalonians 4:13–18.

Offer Condolence for the family of James G. Haning