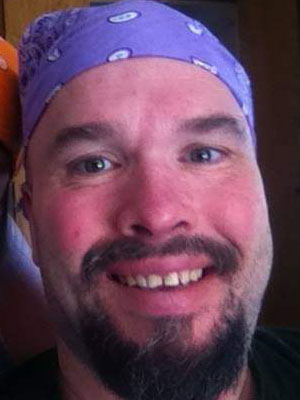 James “Jim Bear” Colum, of Prior Lake, passed away suddenly on Saturday, June 12, 2021 at the age of 54. He was a loving husband, father, son, brother & friend. He will be missed by all who loved him.

Private family service will be held locally in Jim Bear’s honor. The “All My Relations Community” founded by Jim Bear and Kathleen in Joliet, Illinois will be honoring Jim Bear on Saturday, June 26, 2021 with songs, prayers and a lodge. For details, please contact Kathleen directly at (815) 439-8022 (home office number). In lieu of flowers, memorials are preferred and can be made to the following charities: NARF Donation Form, NAIITS – Support, or Donate to The Trevor Project.

When “Jim Bear” Colum formally introduced himself to his wife Kimmi during their wedding ceremony in February 2020, he first gave her his given name “James Edward Colum” and then his traditional name “Wamakaskin Changu” which loosely translates in Lakota to “Path of the Bear.” Jim’s introduction of his two selves is a fitting analogy of his entire life and the duality he always embraced. He often seemed to have one part of his body and/or spirit in two worlds at the same time. You can see it, hear it and feel it when you spend time with him.

As a licensed massage therapist, Jim gave comfort and relaxation through his hands, but was also able to draw upon his inner senses to know what someone needed without them saying a word, he often knew what they needed before they did.

In his daily life, you would also notice the duality of his world. For instance, he is incredibly passionate about game play and spent countless hours developing and honing his talent playing some of the most complicated board/card games on the planet. Dungeons & Dragons was only the beginning. With Magic The Gathering, there was an entirely new level of complexity that required the most focused attention to intricate details and layers. He could and did play with some of the best and only craved more.

On the other hand, he was called to an entirely different reality as a respected practitioner of Native American-inspired ceremonies that celebrated the most simple and profound understanding of the interconnectedness of all life. He experienced his spirituality in ways rooted in ancient practices that allowed him access to the spirits that lead the way long before him. He devoted his energy, time and attention to excellence and learning, becoming a veteran Sun Dancer and a leader in the ceremonial community. He loved to teach others and mentored many as he continued to grow and learn along his own path. He identified his spirit animal as the Polar Bear, an ancient and powerful totem associated with death and rebirth as well as transformation and the ability to navigate earth’s energy lines.

Jim Bear also saw others through a dual lens. He recognized people’s strengths and enjoyed them without demanding anything from them. It truly didn’t matter to him how they looked, or talked or conducted their lives. He was absolutely accepting and fair. He made no assumptions about what you should or shouldn’t do or be because of your race, gender, religion, politics or any of that. He also had the ability to look past the outward veneer and see you as you are beneath, providing the energy and support you need before you really knew you needed it. This was his special gift, one he gave willingly and without strings attached. You need only to get to know his daughter Shayla to see that this gift has survived his earthly passing.

Jim Bear was compassionate and caring, and above all, a family man. He wished for and influenced his family to be the absolute best they could. Jim’s pride and joy was Shayla for many years. He would BEAM when he spoke of her and so enjoyed sharing her accomplishments and when Jim spoke of his growing family his excitement was contagious! He spoke of the honor of having another daughter and a son through his marriage to a woman that he described as his other half that made him whole and complete. Jim didn’t just see Kim’s kids as his own, they were his own in his heart. As a father, he encouraged them to create their own path. He provided encouragement and support to Amber to be herself during a difficult time in her life. He helped to build Jacob’s confidence in the kitchen, nurturing his natural curiosity and abilities. He fostered a growing sibling relationship between Shayla, Amber and Jacob. No matter what was going on in his life, he made time to be with his family, it was his number one priority.

The most tragic duality was that while his heart was vast and generous, that it was kind and giving, it was also physically limited. Perhaps his earthly heart couldn’t keep up with his desire to give and maybe he simply needed to move to a place with more capacity. A place like that is not found on earth and he will be greatly missed. Jim Bear believed that after leaving his earthly body he would begin a journey to join the ancestors, and there is little doubt he would enjoy that journey with the same enthusiasm, joy and humility with which he enjoyed his short time here on earth.

We will all miss you Jim Bear!!

Offer Condolence for the family of James “Jim Bear” Colum