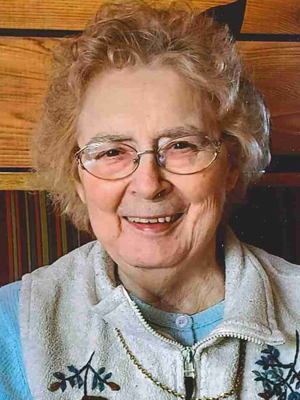 In lieu of flowers, memorials are preferred and will be distributed by Irene’s family to her favorite charities. Cards may be mailed to Ballard-Sunder Funeral & Cremation; 104 First St. W.; Jordan, MN 55352.

On August 4, 1935, parents William and Vera (Murray) Reddy celebrated the birth of their daughter, Irene Catherine Reddy. She was born and raised on the family farm in Graceville, MN. The middle of five children, Irene tagged along with her brothers often helping with farm chores and playing baseball. By her own admission, Irene was a bit of a tomboy.

Following her graduation from Graceville High School in 1953, Irene continued her education by taking accounting and secretarial classes. In later years, she worked at the Masonic Home in Bloomington until her retirement.

While on a blind date, Irene met the love of her life—George Buresh. While they were dating, George enlisted in the Army. Despite the distance, they corresponded through letters and their love continued to grow.

On January 7, 1956, Irene and George were united in marriage at Holy Rosary Catholic Church in Graceville. They were blessed with 58 years together and a loving family. Irene was a devoted companion to George, a loving mother to her children, and a doting grandmother. A talented seamstress, cook, and baker she loved making clothes for her children—especially cowboy pajamas. Holidays were filled with her wonderful food and family. Along with George, Irene enjoyed playing cards, canning vegetables, going on walks, traveling, and bird watching. Irene was also an avid reader.

Offer Condolence for the family of Irene C. Buresh