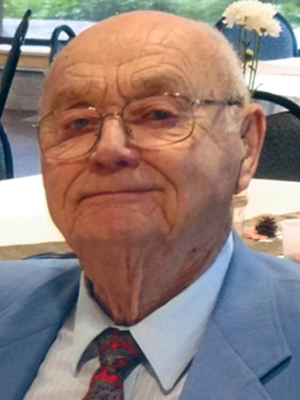 Henry “Duke” Schrader, age 94, passed away August 20th, 2021 at the Belle Plaine Lutheran House. Services will be held at St. Michael’s Catholic Church in Prior Lake at 11:00 AM on Tuesday, August 31st, 2021. There will be a visitation prior from 9:30-11:00 AM. Father Tom Walker will be officiating the service. Internment will take place at St. Michael’s Catholic Cemetery following the funeral service.

Henry “Duke” Schrader was born in 1926 to Henry and Anna Schrader. He spent the first years of his life in Minneapolis as his father was a Minneapolis police officer. As a young boy, he and his family moved to Prior Lake. They moved into their lake cottage full time. Duke was an only child.

Duke attended school at Prior Lake where he first met his lovely future wife, Kathleen (Kate) Cates. The pair met each other sometime around the 5th grade.

In 1943, Duke joined the United States Army and served in the Pacific Theater for two years until his honorable discharge.

Duke and Kate got married on May 11th, 1948 at St. Michael’s Catholic Church in Prior Lake. The couple started their family in 1960 by adopting 3 children from Catholic charities. He was a very devoted husband, father, and Catholic. He attended mass at St. Michael’s religiously.

Early in his working career, Duke was a welder working for Port Cargill in Savage. He worked on WWII Navy vessels during the night and would come home and sleep at his lake cottage. Duke enjoyed living in Prior Lake so much that he ran for public office and was elected mayor. He worked very hard to bolster the police force; Adding a full-time officer (that used a brand-new squad car) and hiring more part time help for the police department. After his time as mayor, Duke joined the Bloomington police department. He was proud of his police service and worked his way up the ranks all the way to Captain. Duke wore badge #17 with immense pride and was honored to be able to wear it. Duke truly adored his job on the police force. But one job was not enough for Duke, he also operated a concrete septic tank company on the weekends in Prior Lake. He balanced the books and did everything that he could to make things go smoothly. As if that wasn’t enough, Duke also had rental properties that he managed. Duke retired from the Bloomington police department in 1979 and continued to run his rental properties and Schrader Block and Tile.

Throughout Duke’s life, he enjoyed snowmobiling, boating, and camping with his friends. In his later years, he and Kate traveled to Arizona for the winters. He was also a great handyman and spent a good deal of time helping his children with any projects they needed him on. Duke enjoyed good health for the majority of his retirement. One of his greatest joys in life was being married to Kate for 73 years. She was a good cook and a wonderful wife.

Duke was eventually overcome by Alzheimer’s and dementia and passed away on August 20th, 2021. He is preceded in death by his parents, Henry and Anna Schrader.

Offer Condolence for the family of Henry “Duke” Schrader