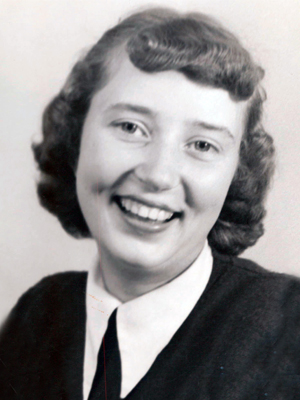 Helen Elaine (Griffith) Pauly, age 85, a long-time resident of Shakopee, MN passed away on Saturday, January 1, 2022. Helen will be laid to rest in a private ceremony at the Shakopee Catholic Cemetery. A Celebration of Life Picnic open to all will be held from 12noon until 4PM on Saturday, June 4, 2022 at Lion’s Park, Pavillion #1, 1103 Adams Street S., Shakopee, Minnesota.

Helen was born to parents David (aka Pat) and Esther (Bair) Griffith in Tracy, Minnesota. The third oldest of seven children, she spent her early school years in Marietta, Minnesota before her family moved to Shakopee where she finished her high school years. She first gained employment at West Publishing, then on the banks of the Mississippi River in St. Paul and Continental Machines in Savage, MN.

In high school, Helen played French horn in the band, was a homecoming princess and enjoyed many other extra-curricular activities. After meeting and marrying a handsome young man from Chaska, Dennis John Pauly, they quickly started growing their family with 7 kids in 7 years: Cynthia, twins Bruce and Barbara, Scott, twins Jeffrey and Joseph and Rodney. As Dennis’ health declined following his diagnosis of multiple sclerosis, so did their marriage. Helen became a single parent of 7 kids but went on to complete her education and become an accountant. She had a new home built for her family in Louisville Township outside of Shakopee.

As a bookkeeper, Helen worked for a variety of businesses including the Jewish Community Center, Lindahl Oldsmobile, Solid Control Industries, and Modern Tire. Always a hard worker, Helen often had a second job waitressing -starting when she worked the lunch counter at Shakopee Drug in high school. She also enjoyed serving customers at Louisville Lanes, Jim and Lucy’s, and the Rock Spring Supper Club.

But Helen was not all work and no play. She was a lifelong and avid bowler, participating in many bowling leagues including Wii bowling at the American Legion. She passed her passion for bowling to the next generation by coaching junior bowling leagues. Helen was also a Cub Scout leader and youth girls’ softball coach. Helen delivered Meals on Wheels to senior citizens. She helped fundraise for the Multiple Sclerosis Society and other charitable organizations.

Helen always had a strong circle of friends that she traveled and partied with. She orchestrated Viking football parties, egg roll cooking groups, summer pool parties, and card and bunco games that were enjoyed by all. She was an easy person to travel with and took many local, national and international trips with friends such as exotic tropical cruises, historic East Coast cities, Florida beaches, Lake Mille Lac ice houses and even witnessing the volcanic eruption of Mount St. Helen’s in Washington.

She shared her adventurous spirit with her children with regular outings and trips. Helen would load up the family station wagon with her kids-and usually a couple extra -for a visit to the Como Zoo or the Bell Museum or Minnehaha Falls. As adults, Helen’s kids joined her in many bowling trips, softball tournaments and vacations across Minnesota and the U.S.

Although Alzheimer’s robbed Helen of many of these marvelous memories towards the end of her life, she was able to continue with many favorite activities including weeding the garden, caring for pets or babies (dolls) or just walking around chatting with everyone. Helen’s friendly demeanor and easy going, helpful attitude made her a favorite with so many people of all ages and experiences.

Preceded in death and there to welcome Helen home in heaven are her parents, David and Esther Griffith; her sisters Kathleen Robinette and Marlene (aka Mame) Blenkush; her sister and brother-in-law, Marna and Ed Muelken; daughter Cindy Heinen; granddaughter Chelsea Hedstrom; her ex, Dennis Pauly, her in-laws, Christ and Loretta Pauly, brother-in-law, Delbert Pauly and niece Dana Hanson.

Offer Condolence for the family of Helen Pauly