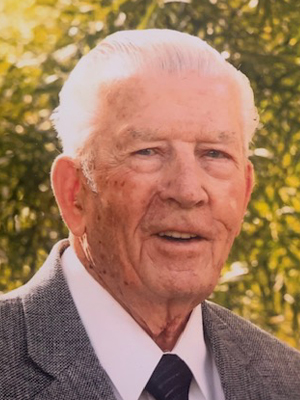 Harley Edward Swenson, age 100, of Prior Lake, MN, died peacefully on Monday, November 30, 2020 at his home surrounded by his family.

Harley was born on December 28, 1919, in LaBolt, South Dakota. Son of Edward Swenson and Ruth (Englund) Swenson. He attended high school in Washington D.C. and graduated in 1937. After high school he joined the Third Armored “Spearhead” division in the United States Army and received a Purple Heart for his tank battles on Normandy Beach and Cologne, Germany. During a 1981 reunion of the Spearhead division, Harley was recognized for his service by the then current governor of Arkansas, Bill Clinton. After the war, Harley attended Dunwoody Institute and the University of Minnesota.

Most of his career was spent in sales. Harley and Gloria raised their family in Richfield and Prior Lake. They moved to Fairfield Bay, Arkansas for several years and moved back to Prior Lake in 2009 to be closer to family. Harley loved his family, friends, and Harleys. He rode his Harleys from the 1930s until he was 80.  He met his wife in 1947 while riding his Harley. He enjoyed the Honor Flight to Washington D.C. with fellow World War II vets.

He was preceded in death by his parents; brother, Willard; sons, Richard and Robert; and nephew, Daniel Swenson.

Private family services. Burial with military honors at Ft Snelling and a celebration of life at a later date.

Offer Condolence for the family of Harley Swenson