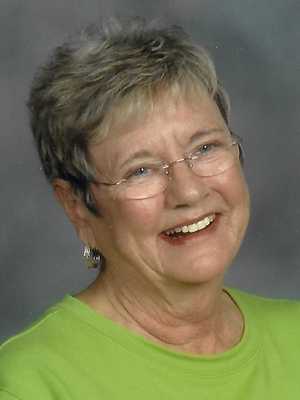 Gwen (Klingberg) Patchin, of Prior Lake, passed away September 28, 2019 at the age of 79.  A Celebration of Life Service will be held on Friday, October 4, 2019 at 4:00 PM with visitation from 2:00 – 4:00 PM at Ballard-Sunder Funeral & Cremation (4565 Pleasant Street SE) in Prior Lake.  Pastor Karen Treat will preside, and Gwen will be laid to rest with her beloved husband at St. Paul’s Cemetery in Prior Lake.  A reception will follow at Fong’s Restaurant in Prior Lake.

On January 5, 1940, Gwendolyn Eleanor Klingberg was born to parents Harold & Maebel (Mueller) Klingberg.  Gwen loved growing up in Prior Lake.  In High School, she was known as the funny one.  Gwen could make all her classmates and friends crack up with her antics.  During her school years, Gwen made many lifelong friends.  She was part of a close-knit group of guys and gals who called themselves the Ya-Ya’s and Yo-Yo’s.  Gwen was proud to be a cheerleader.  Later her daughter and granddaughter would follow in her footsteps; therefore, having three-generations of cheerleaders in their family.

After graduation, Gwen attended Mankato State before finding work as a dental assistant.  It was at work that she was introduced to a kind young man, a patient named Peter Patchin.  Gwen was immediately fond of this patient, so she scheduled a follow-up appointment with him and then another appointment and another.  Finally, Peter got the hint and asked her out on a date.  Their love grew deeper every day, and they exchanged wedding vows on November 14, 1959.  Their marriage was blessed with three children, Brad, Stephanie & Burke.

Peter & Gwen eventually settled in Prior Lake to raise their family.  When the kids were young, Gwen was a homemaker.  She occasionally worked outside the home at a local dental office or at the family business Peter Patchin and Associates.  In 1977, Gwen also became an LPN and worked at New Prague Schools as the school nurse.

As a family, the Patchins spent a lot of time on the water and especially enjoyed time at their cabin on Fish Lake.  Gwen loved everything about fishing; she loved catching, cleaning, cooking and most of all eating fish!  Over the years, the Patchins hosted many fish fry’s at their cabin.  There was never a shortage of fish, cocktails or good times.  Gwen was always the life of the party.

After their kids were grown, Peter & Gwen moved to Burnsville.  They began splitting their time between Minnesota and Florida.  They had a home in Fort Meyer Beach for more than 20 years.  Gwen & Peter made many wonderful friends in Florida through their church.  They enjoyed eating out at local restaurants and hosting cocktail parties.  In retirement, Gwen also enjoyed traveling, playing cards, sewing, golfing and spending time with family.

Grandkids were especially important to Gwen.  She referred to them as her “Love Bugs” and they were the light of her life.   Every Christmas, Gwen would sew a pair of pajamas or a bath robe for each of her grandkids.  She also gave them all a log cabin patchwork quilt for graduation.  Gwen and Peter were instrumental in helping their grandkids with the cost of college tuition.  They were both so proud of what their grandkids accomplished.  She also enjoyed when the great-grandkids would come to visit her.

Gwen was loved by all the people around her.  She had a vibrant personality and was always making her friends laugh.  Gwen was quick with a witty comment and had code names for everyone around her.  She had a strong following of friends, but the most important person in her life was her husband Peter.  Gwen & Peter loved each other deeply.  Gwen’s family takes comfort knowing that they have been reunited in Heaven.

Offer Condolence for the family of Gwen (Klingberg) Patchin