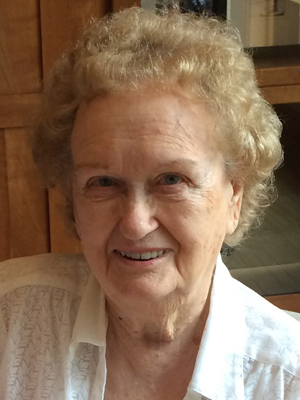 Born on November 17, 1927 in Herington, Kansas to Daniel and Esther (Welch) Allen. She met Orville “Frank” Francis Worrell while he was serving in the Army during WWII. They married on June 13, 1944 in Herington, Kansas. After the war, they settled in Frank’s hometown of Minneapolis, Minnesota.

During much of their marriage, Geraldine was an entrepreneur and business owner, founding and operating grocery stores and a liquor store in Bloomington and Eden Prairie for 25 years. They enjoyed a cottage on Prior Lake and eventually moved to Prior Lake and most of the family settled there as well.

In addition to her children, grandchildren, and great-grandchildren, Geraldine’s passion was quilting. She touched hundreds of lives with her quilts during her life and her quilts are cherished by family and friends. She was a member of one of the early Prior Lake Quilting Clubs and her charities included Caring and Sharing hands, Women’s Alpha Center, and Families Moving Forward.

Private family services will be held with burial at St. Michael Catholic Cemetery, Prior Lake.

Offer Condolence for the family of Geraldine L. Worrell