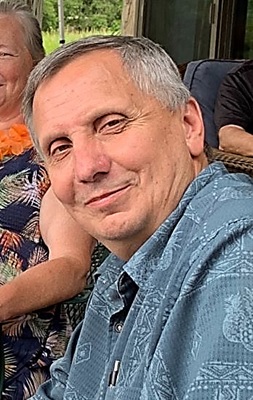 Gerald Joseph Ziskovsky, age 56 of Prior Lake, passed away on Saturday, September 24, 2022 while surrounded by his family.

A visitation will be held from 4-7PM on Friday, September 30, 2022 at Ballard-Sunder Funeral Home, 4565 Pleasant St. SE, Prior Lake. A Mass of Christian Burial will be held on Saturday, October 1, 2022 at 10AM with a visitation beginning at 9AM all at St. Michael Catholic Church, 16400 Duluth Ave SE, Prior Lake. In lieu of flowers, memorials are preferred and will be distributed by Gerald’s family in his memory

On April 26, 1966 at Queen of Peace Hospital in New Prague, Gerald was born to parents Joseph and Betty (Flicek) Ziskovsky. Along with his siblings, he was raised on the family farm near Veseli and attended New Prague schools.

Following his graduation from New Prague High School in 1984, Gerald attended Faribault Vo-Tech before entering the work force. He was employed with the Ford Twin Cities Assembly Plant until their closure. During this time, Gerald was an active member of the UAW (United Auto Works) 879 union.

In later years, Gerald found great enjoyment working for the Prior Lake Savage School district. Starting in 2020, he was coined the “Hat Man” by students and staff alike. As the school navigated distance learning, Gerald wanted to bring joy to everyone. He soon started wearing silly, funny hats guaranteed to earn a smile and laugh.

A generous and outgoing man, Gerald was active in the community. He volunteered with the Prior Lake Lions as well as the 5M2 District Lions, often chairing committees and stepping into any role when needed. Gerald never hesitated to help his family, friends, neighbors, church, and community. He truly had a servant’s heart.

While volunteering with the Veseli Jaycees, Gerald was introduced to Kris Johnson. On October 30, 1993 they were united in marriage at Most Holy Trinity Catholic Church in Veseli. They were blessed with two daughters and 28 years together. Gerald embraced family life—he was his girl’s biggest supporter! He enjoyed coaching his daughters in softball, as well as being their dance partner in father daughter dance at Premiere Dance Academy. He took every opportunity to spend time with his family.

Gerald’s definition of family was far reaching as he considered many of his friends to be family. He loved socializing, traveling, and teasing friends with his witty one-liners. In his free time, Gerald enjoyed gardening, decorating for the holidays, and contributing to his “unofficial” job of sending in the weather and trivia questions to his favorite radio station KCHK

He is preceded in death by triplet children at birth; father-in-law, Tom Johnson; and his grandparents.

Offer Condolence for the family of Gerald Joseph Ziskovsky