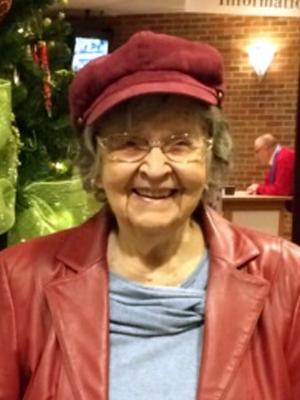 Florence Georgina Bender Wittstruck was born on July 25, 1919 in Butler, NJ, to Horace and Eleanor (Thorne) Bender. She attended Butler High School, where her classmates, recognizing her beautiful voice, predicted that she was “bound for the met”. Their senior class trip took them all to see Mount Vernon.

Upon her graduation from Butler High School in 1937, Georgina enrolled in the Presbyterian Hospital School of Nursing in Newark, NJ. It was during this time that she met a young man attending Drew Theological School. Clifford Wittsturck sent her a letter, saying that he was permitted to go off campus only if he was under the care of a nurse. Georgina agreed to this, and their life-long journey of love began. Being sensitive to Clifford’s limited budget, Georgina always suggested an ice cream cone as their dating snack. She graduated from nursing school in 1940.

Georgina and Clifford were married on October 16, 1940, at the Methodist Church in Butler, NJ. Then began their shared ministry at Alford-Housatonic, Hartsville, MA (1940-1942), followed by Philmont-Harlemville, NY (1942-1946), and Ardsley, NY (1946-1949). In 1949, Georgina ventured west with her husband and three children (Nancy, Thorne, Bob), pulling all their belongings behind them in a small trailer. During their time in Lakefield, MN (1949-1958), Georgina worked part-time at the Lakefield Hospital and gave birth to a fourth child (Cliff). In 1958, the family moved to Pipestone, MN (1958-1967). During this time, while Clifford was pursuing some continuing education at Drew, Georgina found her way into New York City, where she appeared on the TV game show “Say When”. She managed to win several great prizes, including a grandfather clock, a color TV, a fur coat, and several other items, most important of which to her ice cream loving family was the one hundred dozen Heath ice cream bars. Georgina seemed to have the winning touch because later as a member of the audience in “Sale of the Century”, she won a set of Wedgewood China. Also in Pipestone, Georgina worked some as a nurse in a doctor’s office. She also gave birth to her fifth child (Patricia).

From 1967-1974, Georgina and Clifford served the United Methodist Church in Montevideo, MN, and the rural Rosewood Church. From 1974-1980, they served Portland Avenue UMC in Bloomington, MN. Clifford retired in 1980, when Georgina and Clifford moved to Holiday, FL and later to Clearwater, FL. In 2006, they moved back to Minnesota, living in a retirement home in Prior Lake.

Music was at the core of Georgina’s life. The theme of her life was Psalm 104:33: “I will sing to the Lord as long as I live; I will sing praise to my God while I have being.”

She could easily sing:

“My life flows on in endless song…

Since love is Lord at Heaven and Earth,

How can I keep from singing?”

Georgina was a champion for her family, making their support and care a priority in her life. She was a wonderful cook and baker, was one who put on the clothes of rightness. She was a cheerful person who enjoyed a good laugh. As her high school class observed long ago, she was “on duty” for “cheering up the world”.

Georgina died on February 16, 2022 in Prior Lake, MN. She was preceded in death by her husband, Clifford Wittstruck; parents, Horace and Eleanor Bender; her brother, Thorne; her sister, Miriam Isabel “Belle” Bender Nees (and her husband Ernie Nees); her son-in-law, Donald Glaesemann; her son, Robert; and her granddaughter, Amber.

Offer Condolence for the family of Florence Georgina Bender Wittstruck