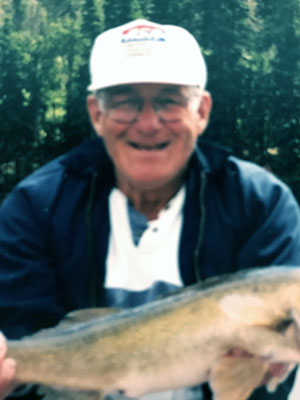 Eugene Ouellette, age 87 of Fridley, MN, entered eternal life on July 1, 2019.  Mass of Christian Burial will be held on Tuesday, July 9, 2019 at 11 am with visitation at 9 am at St. Michael’s Catholic Church, 16400 Duluth Ave. SE, Prior Lake. Gene will be laid to rest at Fort Snelling National Cemetery. Father Tom Walker will preside and Gene’s grandchildren will act as urn bearers.

In lieu of flowers, memorial donations are preferred and will be distributed by family to both Alzheimer’s Association and Grace Hospice.

On July 27, 1931 in Northeast Minneapolis, Napoleon and Mary (Lestina) Ouellette celebrated the birth of Eugene Lawrence Ouellette (and twin brother Don). He was one of nine children. In his youth, Gene played football and wrestled at Edison High School. Following his high school graduation in 1950, Gene enlisted in the Navy. He toured the world aboard the USS Ingersoll and proudly served in Korean War.

On July 15, 1953, Gene and Ann exchanged wedding vows at the Church of All Saints in Northeast Minneapolis. They were married for 56 full years. They would describe their lives together as full and fortunate.

Gene was a true family man! He was always supportive, wanting to provide the best life for his wife and children. The family enjoyed the little moments of life—going up north, picnics with extended family, playing cards or cheering on the Vikings & Twins. Gene loved sharing his pastimes with others. Whether it was fishing or golfing with Jeff or dancing the Polka at many weddings and family celebrations. He loved to dance. Gene was happiest when he was with his family.

After his discharge from the Navy, Gene began working as an airplane mechanic. After a 30-year career with Northwest Airlines, Gene retired. Retirement allowed Gene to focus even more on his family. He cheered on his grandchildren at countless football and soccer games! Despite being an avid football player, his 3 granddaughters played soccer and he would watch them and he truly learned the game. He taught them when they lost that, “you win some and you lose some.” They traveled to many wonderful places including New Zealand, France, England, Hawaii, and everywhere in between. Their favorite place was Palm Desert, CA, where they were fortunate to spend a few months in the winter and always knew how blessed they were to escape winter for a few months.

When Ann was diagnosed with cancer in 2010, they moved to Prior Lake to be closer to family.  Five years ago, Gene was diagnosed with Dementia that eventually led to Alzheimer’s. This strong man fought to the very end and was able to remain independent up until 6 months ago.  He would still recognize his family up until the very end, a small sign of how much he thought of his family. His life was defined by his sense of compassion, dedication, and loyalty. Gene was fun loving and had a great sense of humor—he could make people laugh and told many jokes.  When he told a joke, he would start laughing so hard before the punch line and we would all laugh at him…we were no longer listening to the joke…just at his laugh.

In lieu of flowers, memorial donations are preferred and will be distributed by family to both Alzheimer’s Association and Grace Hospice.

Offer Condolence for the family of Eugene Ouellette