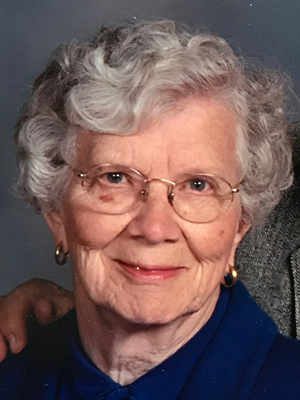 On February 9, 1924 in Camanche, Iowa, Esther was born to parents Christian and Ida (Stuedemann) Paysen. Along with her brothers and sister, Esther grew up in an old stone farmhouse in Clinton county. During her youth, Esther participated in 4-H and she developed an appreciation for nature.

One of the most trying moments of Esther’s life happened on her confirmation day. Her brothers Leonard and Edward accidentally died after being electrocuted. While difficult, Esther relied on her faith to persist. She continued to have a strong faith throughout life.

Following her high school graduation, Esther attended Bethany Lutheran College in Mankato. She eventually returned home to assist her family on the farm and complete her education at Iowa State. Esther graduated with a bachelor’s degree in Home Economics.

During World War II, Esther worked at DuPont in Clinton. While the job was typically considered more suitable for a man, Esther’s knowledge of chemistry qualified her for the position. Later, Esther began working for the Pillsbury test kitchen in Minnesota.

While attending church near the University of Minnesota, Esther met Lyle Kragh, a student from the medical school. The couple married on August 5, 1951 at St. John’s Lutheran Church in Clinton, IA. Esther was a devoted wife, mother, and grandmother. She always enjoyed baking and even participated in the Pillsbury Bake Off Contest, ranking in the top 100.The family enjoyed spending time at their cabin south of Jordan. Most weekends were spent maintaining the property, going on nature walks, and hosting family, friends & church youth groups. With her grandchildren, Esther enjoyed picking raspberries and asparagus.

In retirement, Esther and Lyle traveled extensively. One of their most memorable trips was sponsored through the MN Landscape Arboretum. Both having a background in agriculture, they joined a group tour exploring dairy farms across South America and Asia. She was a member of Fish Lake Immanuel Lutheran Church since moving to Jordan.

A special thank you to Ridgeview Home Support and Hospice for all the care and consideration given to Esther.

Offer Condolence for the family of Esther M. Kragh