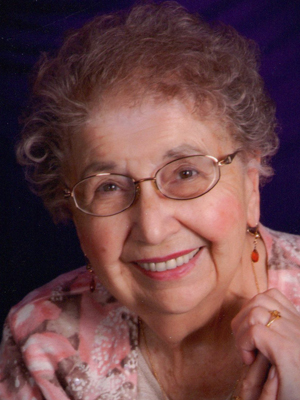 Frank & Lucy (Majnaric) Marincel celebrated the birth of their daughter, Emily Elizabeth Marincel, on November 19, 1925. She was the eighth of ten children and was very close to her siblings. Honey’s parents were immigrants from Croatia. They settled on the outskirts of Mountain Iron, Minnesota, in a small neighborhood of their Croatian friends and relatives, which was informally called The Hill. Emily was always very connected to her Croatian heritage. Honey was very small when her father died. She was always very close to her mother who taught her the importance of family.

As a girl, Honey was on the swim team. After graduating from Mountain Iron High School, Honey began working as a bank teller. She continued living at home to look after her mother.

During this time, she met a nice young man named Gene Amberg. He was a truck driver doing some work in town. Honey was very impressed that he wasn’t only nice to her, but also treated her mother so well. Gene and Honey quickly fell in love, and were married. Emily’s family grew with the addition of Gene’s children and eventually eight grandchildren who she loved so much.

After spending a few years in California, Gene & Emily moved back to Minnesota and settled in Prior Lake. They quickly became involved in the community and church. Emily had a servant’s heart and loved to donate her time and talents at St. Michael’s. She was on the funeral luncheon committee, a money counter, in the Single Seniors and Golden Agers groups. She was also a long-time member of a prayer group. Emily was so close to the members of her Cursillo group; they were like family to her.

In her free time, Honey loved gardening. She could grow anything and was blessed with a green thumb. She also was an excellent cook. Honey was known for making traditional Croatian dishes, but everyone LOVED her Potica (sweet bread). Emily also loved to travel. She and Gene took road trips all over the country. They loved visiting family and friends, and they always had a wonderful time.

When Gene passed away in 1999, Emily spent more time with her extended family and friends. Emily had many dear friends and really invested in relationships. She was a trusted aunt to all the Marincel nieces & nephews. She was also the connection back to family in Croatia and interested in genealogy. Over the years, Honey made several trips to Croatia. She was a wonderful wife, step-mom, grandma and aunt. But one of the most important relationships in her life was with her mother. Honey cared for her elderly mother at the end of her life. They spent countless hours sharing stories, and Honey authored a book titled, Mother’s Memoirs.

Throughout her life, Emily was enormously hospitable. She was so welcoming and generous to everyone she met. You were always greeted with a cheerful smile and a hug. She was very bright and had a terrific, dry sense of humor. She will be deeply missed by all who loved her.

Offer Condolence for the family of Emily “Honey” Amberg