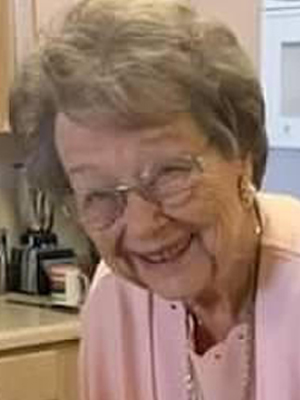 Eleanor Gae Wierman, beloved wife, mother, grandmother, great grandmother, sister, aunt, great aunt, and friend to many, went to her eternal home with her Lord and Savior, Jesus Christ, Monday, March 23, 2020 at the age of 91.  She passed peacefully following a brief battle with cancer.

Eleanor was a Midwest girl from Hope, Kansas.  She was baptized, confirmed, and married at her home church – St. John’s Lutheran Church.  Following high school graduation, she attended and graduated business school in Salina, KS and then moved to Topeka, KS to begin work at the state capitol.  It was in Topeka where she met her husband, Dean, who had recently returned from serving in the Army, Philippines, during WW II. Following their marriage on June 12, 1949 they moved to Hollywood, CA where her husband completed chiropractic school and established a practice.  They built a house in Semi Valley, CA and it was during this time their daughter Gae Lanett was born.

During their 60 years of marriage, Eleanor and her husband lived in Kansas City, Mo., where he completed osteopathic school, Dallas, TX. where he established his practice and where she gave birth to her son, Troy Dean, and Bella Vista, AR, where they lived out their retirement together.  Upon the death of Eleanor’s husband, Dean, she moved to Minnesota to be closer to her daughter and several of her grandchildren and great grandchildren. She resided at New Perspective in Prior Lake, MN until her death.

Eleanor and Dean were blessed to be married 65 years.  They were able to see their children get married, experience and celebrate the birth of their grandchildren and their grandchildren’s graduations and even many of their marriages.  They were blessed with ten great grandchildren as Eleanor was able to hold them as babies and watch they begin to grow up. Their marriage and life together was a storybook romance that inspired all who knew and loved them.  Their faith in God and love for Jesus Christ was reflected in their lives and passed down to their family. Family was so important to them. They were so proud of their family and cherished each and every member. We often were reminded that, “This all began with Daddy and me.

Her family greatly loved their mother, grandma, and GG.  She will be greatly missed. We celebrate and give thanks for her life here on earth and for her eternal victory and life with Christ Jesus in heaven.  She will continue to live in our hearts and memories. To God be the glory!

Offer Condolence for the family of Eleanor Wierman