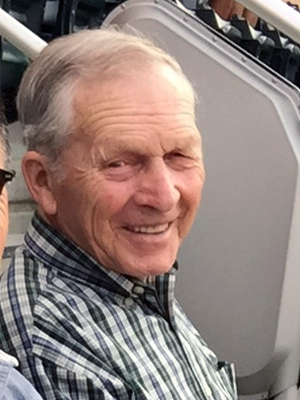 Earl was born on Friday, February 7, 1930, in Northome, MN, to Don and Anna (Nordby) Estabrooks. At a young age, he learned the value of hard work, having a deep faith and being committed to family. The fifth of eight children, Earl spent his early years on a dairy farm near Northome, Minnesota.

Earl had his first job delivering milk to homes from the family dairy, at the age of 13. In the years following, Earl worked “in the woods” logging, as a janitor, and in the road construction industry. Later on, Earl returned to truck driving hauling milk from area farmers to creameries. After retiring, he worked part time for Jerry’s Lawn Service, until he was 88 years old.

At a dance in Northome, Earl met his future bride, Carole O’Loughlin. Before they could wed, he was drafted into the United States Marine Corps, in 1952. On leave from boot camp, Earl and Carole were united in Holy Matrimony, on August 30, 1952, at St. Michael Catholic Church, in Northome. The newlyweds moved to California for the duration of Earl’s enlistment until 1954. They returned home to Northome, where they started a family. Earl and Carole were blessed with four children.

Earl and Carole raised their young family in Northome, before moving south for employment opportunities to Shakopee, MN, in 1967. He worked extremely hard to provide a good life for his family, often working multiple jobs at once. His and Carole’s lives were eventually blessed with grandchildren and great grandchildren. Earl was so proud of them and cherished his time with them.

In 1993, Earl and Carole moved to rural Jordan. He always had a deep love for nature and being outdoors. He spent countless hours watching and feeding the birds, turkeys, and deer, along with skiing, skating, and snowshoeing. Earl and Carole enjoyed playing cards with family, weekend motorhome trips metal detecting, and trying their luck at area casinos. Earl enjoyed music, often singing and dancing to Irish and old country tunes.

Earl was an inspiration to his family through the examples he practiced, staying physically strong and after retirement walked several miles a day and ended each day with 100-pushups. Earl instilled the value of hard work, helping others and keeping family close, and had a wry sense of humor. Earl had a deep faith in God. He encouraged others with friendly, often humorous advice, such as “Things will look a little better in the morning”, “We do the best we can with the tools we’ve got”, and “Don’t let the bastards get you down.” Earl also had a special way to say goodbye to his great-grandchildren with “Tooley Ooley,” as he would leave.

Offer Condolence for the family of Earl C. Estabrooks