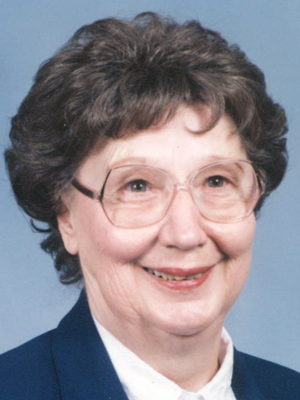 A lifetime resident of Jordan, Dorothy A. Pauly entered eternal life on March 14, 2020 at the age of 96.

A Mass of Christian Burial will be held on Tuesday, March 17, 2020 at 11:00 AM, with visitation one-hour prior at St. John the Baptist Catholic Church (210 North Broadway) in Jordan. Father Neil Bakker will preside, and Dorothy’s nieces and nephews will act as pall bearers. Dorothy will be laid to rest at Calvary Cemetery in Jordan.

Born on July 29, 1923 on the farm in Jordan, Dorothy was ninth of ten children to parents Henry and Ann (Sunder) Krauth. She attended St. John’s Catholic School through the eighth grade and graduated from Jordan High School in 1941.

Dorothy worked as secretary and bookkeeper in St. Paul and Minneapolis until 1957. She then married Victor Pauly on February 16, 1957 at St. John the Baptist Catholic Church. Dorothy returned to Jordan to join him on the farm until 1979, when they built a house in Jordan. She also worked as a clerk for The Bakery in Jordan, which was operated by her brother for several years. Dorothy was an office manager and bookkeeper at the Jordan Independent until retiring in 1980.

In her free time, Dorothy enjoyed crocheting, quilting and praying the rosary. Together, Dorothy and Victor enjoyed traveling to visit family and friends in California, Oregon, Washington and Arizona. They also spent many summers at a cabin near Clear Water Lake in Annandale. Dorothy made many wonderful memories there. Although Dorothy had a number of interests, the most important things in her life were her family and faith.

Left to honor Dorothy’s life and mourn the death are her beloved nieces and nephews and many devoted friends.

Offer Condolence for the family of Dorothy A. Pauly