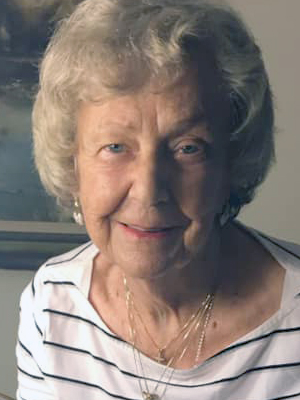 Donna Story, age 87, of Prior Lake, MN, passed away peacefully, from natural causes, on Saturday, April 11, 2020, at St Gertrude’s Health and Rehabilitation Center, in Shakopee, MN.

A Celebration of Life will be held on Tuesday, June 30, at 11 am, with a time of gathering from 9:30-10:50 am, at St. Paul’s Lutheran Church, 5634 Lutheran Road, Prior Lake, MN. Pastor John Kallio will preside, with children, Jay and Jonelle acting as urn bearers. Donna will be laid to rest at a private family burial at Fort Snelling National Cemetery, in Minneapolis, MN.

Donna Mae was born on January 29, 1933, in Flandreau, SD, to parents Edwin and Mathilda (Iverson) Johnson. The youngest of nine children, she unfortunately lost her dad, at the age of 3. Her Sister Viola stepped up after the loss and helped Mathilda raise Donna. She attended a Native American School, where Viola was a teacher. In her teenage years, the family moved to Mankato, MN, to be closer to her brother Wally. Donna graduated from Mankato High School.

An aspiring artist, Donna was hoping to attend an art school, instead she devoted her career to being a wife, mother and grandmother. Unbeknown to Donna, she met the love of her life, Courtlin Elg Story, while taking a walk. After dating, and a weeklong engagement, (due to his military service commitment) they were wed on November 26, 1951, at Bethlehem Lutheran Church, in Mankato.

After Courtlin returned from the service, Donna and he were blessed with two children, Jay and Jonelle. Courtlin accepted a teaching position and in 1959, the family settled their roots in Prior Lake. The Story family loved camping and exploring Minnesota and adjacent borders. She also spent countless hours cheering on her children, in their sporting events and school activities. As the children grew older, Donna and Courtlin expanded their horizons with traveling the United States and abroad, with friends of the Prior Lake Windjammers.

Through the years, Donna worked various jobs and she would often say, “I am a Jack-of-all-Trades and a Master of None!” Donna’s vocation was being committed and devoted to her God, husband, children, grandchildren and friends. She and Courtlin were charter members of Shepherd of the Lake Lutheran Church and later attended St. Paul’s Lutheran Church. Donna had a deep Christian base. She loved attending bible studies, reading the bible and Christian novels. Donna was also an active volunteer with the Blood Mobile, Meals on Wheels, St. Francis Regional Medical Center and as an election worker. Life for Donna was fulfilled becoming a grandma to five amazing grandchildren. They became her main priority and relished being active in all their lives. In Donna’s spare time, she was proud of being 100% Norwegian and loved making Scandinavia desserts and great pies.

There to greet Donna home in heaven is her husband, Courtlin; parents, Edwin and Mathilda and 8 siblings.

Offer Condolence for the family of Donna Story