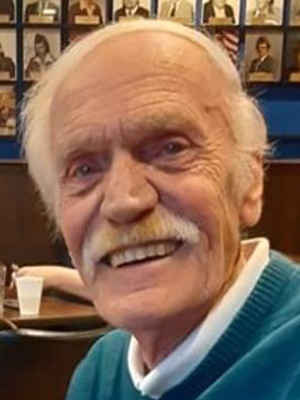 On September 15th, 1939, DelRoy “Del” Johnson was born to R. Bennie and Vivian Johnson. When Del was brought back to the family home in West Sweden, he got to meet his 3 older siblings; Dennis, Derrell and Delaine. The family was 100% Swedish and the whole family was proud of that fact.

In 1960, Del and his lovely wife Barb eloped at the Little Brown Church in Nashua, Iowa. In the early 1970’s, Del and Barb moved to Prior Lake, Minnesota on Spring Lake. This is where they raised their four children; Mark, Janelle, Dawn and Brian. They lived there until Barbs passing in 1987.

Del worked in various sales positions throughout his life. The type of sales he was most well known for were his home-good sales. Samples are a large part of selling home goods and the problem for Del was figuring out what to do with the ever growing collection of new samples. So he started having a “garage” sale. After a couple of years, the ladies in the surrounding towns learned that Del was selling these quality samples of new home goods and wanted in on the deals. Del quickly became known as “The Garage Sale Guy.” On the day of the sale, people would line up outside of his closed garage door, waiting for it to open to see this year’s wares. It was a win-win for everyone involved. The community got reasonably priced house goods, and he had a good time and made some extra cash using his great sales skills.

In December of 1989, Del was united in marriage to his wonderful wife Gail, bringing Gail’s two daughter’s Shannon, and Samantha into the family. In 1997, Del and Gail moved to Prescott, Arizona where Del could fully enjoy one of his greatest joys in life; Golf. Del never passed up an opportunity to play a round of golf. It didn’t matter if he was playing the round with complete strangers because by the end of the round, Del was going to have new friends. Del was so charming and quick witted that making friends was easy for him. He had connections with so many people that it was common for Del to run into someone he knew even if he was 100s of miles away from home. Four years ago they decided to move back to Minnesota where they called Cannon Falls home. Del loved time with his family, BINGO on Sundays at the VFW, Minnesota Viking football, reading the daily Star Tribune, classic cars and a good cup of coffee.

Del was preceded in death by the two loves of life, Barbara and Gail; and his son Brian Johnson. Del will be missed dearly by his children Mark (Kara) Johnson, Janelle Johnson, Dawn Ryan (Chris Sexe), Shannon Arellano, and Samantha (Jeff) Schmidt. He will also be greatly missed by his 12 grandchildren and 5 great-grandchildren.

Offer Condolence for the family of DelRoy Johnson