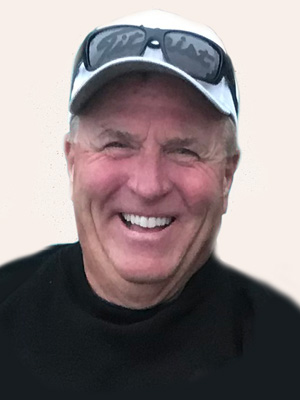 Private family services will be held for Dave with interment at a later date.

David Alan was born on February 20, 1960 to William “Bill” and Patricia “Pat” (Kubias) Flattem in MPLS, MN. Although he was the youngest child of three, there was a big age difference between Dave and his siblings, so he was close with his parents growing up. At a young age, he discovered his love of all things water. He bought his first boat at age 15 and never looked back. Following his high school graduation in 1978 from South High School in S. MSP, Dave attended Normandale Community College and soon started into his lifelong career of sales. After working a few different odds and ends jobs, he landed at Encompass, where he was involved in healthcare sales for over 30 years. About a year ago, he progressed his career and took a position with MIP.

Dave’s life was enriched when he met the love of his life, Lynn Hickey. Quickly after connecting, they started dating and were married a few years later on September 1st, 1984 in S. MPLS. Soon after their marriage, they were blessed with three children, Jake, Matt, and Taylor. Dave passed on his love of the water to his family, eventually settling on Lake O’Dowd in Shakopee. His favorite place in the world was the Whitefish Chain in Crosslake, MN, where their family enjoyed countless family vacations. He was huge into water skiing and boating in the summer, traveling to many different places around Minnesota to enjoy his hobbies with his family. Dave could also be found on the golf course and loved snowmobiling when it was too cold to be out on the boat. Later in life, he was able to be a grandpa for his two grandchildren, Kaden and Keegan, who he loved very much.

Dave was the life of the party. He had an amazing sense of humor and would always pitch in with a witty comment. He was a loyal friend, a great husband, a loving dad, and a fun grandpa.

Dave will be dearly missed by his wife, Lynn; children, Jake Flattem (girlfriend, Chelsey Ludescher), Matt (Kelsey) Flattem, and Taylor (Erik) Molsather; grandchildren, Kaden and Keegan; and other loving relatives and friends.
He was preceded in death by his parents, Bill and Pat; and other relatives.

Offer Condolence for the family of Dave Flattem