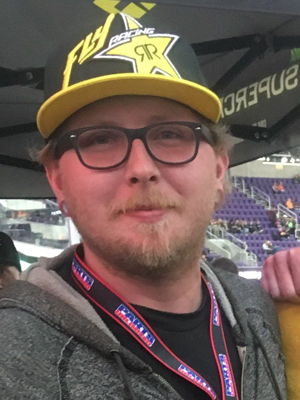 Danny Greig, of Savage, passed away suddenly and unexpectedly on March 12, 2019.  A gathering of family & friends will be held on Friday, March 22, 2019 from Noon – 2:00 PM with a Celebration of Life Service at 2:00 PM at Ballard-Sunder Funeral & Cremation (4565 Pleasant Street. SE) in Prior Lake.  Pastor Diana Hunstad will preside.  In lieu of flowers, memorials are preferred and will be distributed by Danny’s family in his honor.

On January 31, 1993, Daniel James Greig was born to parents Tom & Marie Greig.  As a little boy, Danny was given the nickname, “Bubbs” because he was constantly blowing bubbles.  He was such a happy boy and made friends easily.

In 2000, Danny took up motocross.  His family quickly saw he had a talent for it, and Danny started racing all over the state.  Danny was also involved in Supercross at all the local county fairs.  He made many wonderful lifelong friends through motocross.  Danny especially loved racing the 450 his mom gave him.

Danny attended Hidden Valley Elementary & Eagle Ridge Middle School.  When the time came for high school, Danny chose to be home schooled.  His mother was ill, and he wanted to spend as much time with her as possible.  Marie’s illness brought the entire family close together.  It also forced Danny to grow up fast.  He loved his mom deeply, and it was heart-breaking for Danny when she passed away.

For his senior year, Danny returned to public school.  He graduated from Burnsville High School and was so proud to be the first member of his family to earn his diploma.  After high school, Danny began working.  He spent some time at Good Year Tire in Prior Lake & Crosstown Cycle in Bloomington.  Most recently he worked at a Kawasaki Dealership in Lakeville.  He liked the work and loved his coworkers.

When Danny wasn’t working, he enjoyed playing video games, watching movies and fishing.  He had such a fun personality that everyone gravitated towards him.  Danny had so many wonderful friends, and he loved spending time with them.  But the most important thing in his life was his family.  Danny was so close to his dad.  He loved his brothers and sister, and he was the best “Bruncle” and uncle.  “The Littles” absolutely cherished their uncle Danny!

In 2014, the family expanded when Tom and Kathy were married.  The blending of their two families was seamless.  They all got along so well, and it  was like they had always been a family.  At first Danny had to test Kathy a little bit, but he quickly embraced her.  Soon Danny & Kathy weren’t just family; they were friends too.

Danny was a smart and generous guy.  He had a wonderful sense of humor and left a lasting impression on everyone he met.  His smile and big blue eyes could light up the room.  He lived fast and touched the hearts of so many.

Offer Condolence for the family of Danny Greig