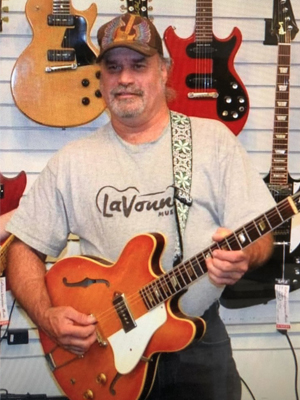 Dan H. Otis, age 59 of Faribault, formerly of the Prior Lake and New Prague area, passed away
on January 14, 2019 following complications from an auto accident. His life will be honored on
January 26, 2019 at 11AM at the NewDay Church, 1201 First Street NE, New Prague, MN.

On May 15, 1959 parents David and Janet (Locken) Otis celebrated the birth of their son, Daniel.
From a young age, Dan had a passion for music. He began playing guitar with his father and his
love of music continued throughout his life.

Dan played local gigs with Plain White Toast, Toots and the Wingnutz, and other groups. Dan
believed music had the power to bring people together. While practicing in a friend’s garage,
Dan met his soul mate, Mary. They worked as a team—she put together chord progressions and
he completed the songs.

Dan never believed that he was “that good” at music, but he always helped other people learn.
He shared his knowledge and talents. A loving grandfather, Dan encouraged his grandchildren as
well. He gifted guitars to his grandsons and a ukulele to his granddaughter.

A tender-hearted man, Dan was generous, loving, and he enjoyed the simple things in life. Going
up north, spending time with family, and attending car shows. Dan was “Loud, Proud, and
Passionate!”

He is greeted in Heaven by his father, David, and twin brother, Dennis.

Offer Condolence for the family of Dan H. Otis