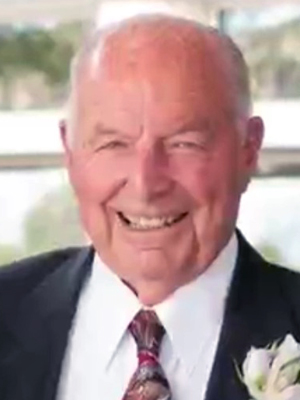 Cy was born on May 26th, 1930 in Jordan, Minnesota to Bernard and Clara (Hennes) Wolf on the family farm. The fourth of eight children, he learned at a young age the meaning of hard work, the act of being humble and having a true dedication to your faith, community and most importantly, family.

Growing up, Cy took great pride and enjoyed the hard work of farm life. Every morning he would wake up, complete his chores, walk three miles to school in Marystown and come back to do the chores all over again. After completing the eighth grade, Cy quit school, as his services to his family were needed on the family farm.

He began his military service by enlisting in the U.S. Navy on January 5, 1951. He proudly served until October 19th, 1954, stationed in North Africa for the length of the Korean Conflict.

While on leave on a warm August evening in 1952 at the Riverside Ballroom in Chaska, Cy spotted a beautiful young woman across the room, Evangeline “Vangie” Williams, and knew she was the one. Because he was serving in the U.S. Navy at the time, this meant a long distance courtship. They wrote each other frequently and would see each other whenever he was on leave over the next two years. He purchased an engagement ring in 1953 at the PX in Morocco and proposed to Vangie in July of that year.

Upon completing his military service, they married each other on an unusually warm Tuesday morning of November 9th, 1954 at St. Victoria Catholic Church. Vangie and Cy settled in Jordan and raised 9 loving children.

Cy was an integral part of the Jordan community. He served as secretary/treasurer of the Jordan Vets Honor Guard. He was a member of the American Legion and former member of the Knights of Columbus. For almost four decades, Cy chaired the Sand Creek Township Board. He was a dedicated civil servant and his goal was the well-being and health of the township and his constituents.

As in everything he did, Cy showed his dedication over the course of six decades as an auto technician for Wolf Motors. From 1957 until this past week, he did one of the things he loved to do, work. He was one of the select few to achieve top scores in the region for the CTP Certified Training Program for the Ford Motor Company.

Faith was at Cy’s core. An active member of St. John the Baptist Church, he served as the first parish council president, a sacristan, a member of the fall festival committee, renovation projects and decorating the church for the major holidays.

His greatest passion in life was being a husband, dad and grandpa. He and Vangie enjoyed spending time with their friends fishing, traveling, playing cards, bowling and dancing.

He was also a loving caregiver to Vangie before she passed on June 5, 2010 and his devotion to her continued, visiting her resting place everyday on his daily walk.

Cy was a dedicated man to his family and deeply devoted to his grandchildren. He was always there for a word of advice, a hug, a smile or just a shoulder. Cy also took pride in meticulously tending his garden, his lawn and his home.

On Thursday evening, October 15, 2015, Cy Wolf, at age 85, was taken from his family unexpectedly near his home in Jordan. His passing was but a moment in time, a period at the end of a sentence that stretched from the day he was born until the day he passed. His family will always celebrate a life that was lived to the fullest, without complaint and one of joy, sharing and love.

The family will greet guests on Friday, October 23, from 3-8 pm at Ballard-Sunder Funeral and Cremation 104 West First Street, Jordan and from 9:30 -10:45 am prior to the mass at church. The Mass of Christian Burial will be on Saturday, October 24 at 11 am, at St. John the Baptist Catholic Church 313 East Second Street, Jordan. Father Timothy Yanta will preside. Pall bearers will be his grandson. Cy will be laid to rest next to his wife, Vangie at St. John’s Calvary Cemetery, Jordan. Full military honors will be provided by the Jordan Vets Honor Guard.

Offer Condolence for the family of Cy Wolf