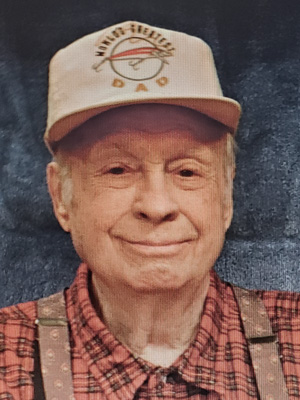 A visitation will be held on Thursday, January 9, from 4-7 pm, at Ballard-Sunder Funeral and Cremation 104 W. First Street, Jordan and on Friday, January 10, from 10-10:45 am, followed by a Mass of Christian Burial, at 11 am, at St. John the Baptist Catholic Church, 313 E. Second Street, Jordan. Father Neil Bakker will preside. Cliff’s grandchildren will act as pallbearers, Todd Williams, Nick Kersting, Tim Kersting, Jeff Beuch, James Nichols and Kody Ewing. He will be laid to rest at St. John Calvary Cemetery, Jordan.

On the Kersting family farm, just east of the city of Jordan, Clifford Joseph was born on January 21, 1928, to Frank and Albertina (Wolf) Kersting. He was fourth of five children. Raised during the depression, times were tough and became even more difficult when Clifford lost his mother at a very young age. But the family remained strong and persevered. Cliff attended St. John’s Catholic School through the eighth grade and then stayed home to help working on the farm.

It was at a ballroom dance in St. Paul, MN, where Cliff met the love of his life, Kathleen Doris Friemann. They were married at Stanislaus Catholic Church, in St. Paul, on September 30, 1950. Cliff and his new wife, Kathy, then took over the Kersting family farm, where they welcomed their first seven children, Karen, Mike, Steve, Linda, Mark, Gary, and Julie. As a family, they continued farming for several years, until Cliff hurt his back and could no longer do the hard work. Cliff and Kathy then sold the farm and took their family to town for a new chapter in their lives. On April 1, 1962, they established Kersting’s Bar in Jordan, with the slogan “Meet Your Friends Here!” While living in the town of Jordan, they welcomed two more children, Kevin and Kathy.  For the next 27 years, Cliff enjoyed playing cards and socializing with his patrons. It was a family affair, with Kathy and the kids helping out. Over the years, Kersting’s Bar sponsored men’s and women’s softball teams, bowling teams, dart teams, basketball teams, pool teams, tug-of-war teams, and car racing. Cliff was extremely proud to sponsor and watch his sons race their red Kersting Bar cars whiz around the track at Raceway Park in Shakopee.

Cliff was proud community supporter. In his earlier years, he was a long-time member of the Jordan Fast Pitch Softball Team. Cliff was an active member of the Jordan Commercial Club, Fish Lake Sportsman’s Club, St. John’s Catholic Church, Jordan Boy Scouts, Knights of Columbus and the Jordan Industrial Development Board. He was heavily involved with 1969 State Amateur Baseball Tourney and continued that in years to follow. Cliff donated his time to take care of the Jordan Mini Met baseball park for 10 years, cutting lawn and tidying up the grounds. He enjoyed attending and cheering on the Jordan baseball team.

Cliff also enjoyed many years of playing and pitching in slow pitch softball. At annual family picnics, he used his skill to help the novices get on base. Cliff enjoyed elk and deer hunting in Wyoming and Minnesota. He also enjoyed both summer and winter fishing, taking annual trips with his buddies to Lake Mille Lacs.

On August 31, 1989, Cliff and Kathy retired and new adventures followed. They started traveling in their motorhome, all over the United States, Alaska and Canada. Cliff and Kathy also traveled abroad, to Europe, Ireland and Germany. They spent winters in Texas, for over 20 years. Filling down time, Cliff worked part time as a parts runner for Wolf Motors.  And any chance allowed, he loved playing cards with family and friends.

Cliff was an amazing husband, dad, grandpa, great grandpa and brother. He was very generous with his time and talents. There wasn’t anything Cliff wouldn’t do for his family, friends or the community.

Offer Condolence for the family of Clifford “Cliff” Kersting