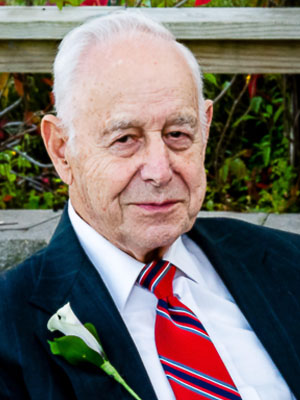 Clem A. Pieper, longtime resident of Jordan, entered eternal life on Saturday, June 12, 2021 at the age of 93.

A Mass of Christian Burial will be held Friday, June 18, 2021, at 11AM with a visitation beginning at 9:30 all at St. John the Baptist Catholic Church, 313 2nd Street, Jordan. Clem will be laid to rest at Calvary Catholic Cemetery with Father TJ McKenzie presiding. Military honors will be provided by the Jordan Honor Guard.

On November 29, 1927, Anton and Theresa (Stemig) Pieper celebrated the birth of their son Clem. He was born and raised on the family’s farm in Marystown. Along with his siblings, Clem attended church and school at St. Mary of the Purification. Despite the short distance, Clem and his siblings would often ride the family horse to school.

A hard worker, Clem helped on the family farm until he enlisted in the United States Army. After his honorable discharge, he returned to Minnesota and continued working as a carpenter. He built and remodeled many homes throughout the Jordan area as well as working on projects for St. John’s Catholic school and church. Long days of ten to twelve hours were common during the busy spring and summer months. Clem developed quite a talent for woodworking over the years and could truly fix almost anything with a block of wood! He enjoyed sharing this knowledge with his children and grandchildren by inviting them to his shop to try their own hand at building.

On June 1, 1954, Clem was united in marriage to Sally Pauly. They were blessed with a loving family and 59 years together. Clem was a devoted husband, father, and grandpa. A family focused man, Clem enjoyed Sunday visits with relatives to play cards, share a good meal and laughter. Playing cards was one of Clem’s favorite past times, and in his earlier years he also enjoyed strumming on his guitar with his kids singing along.

Clem is greeted in Heaven by his wife, Sally; daughter-in-law, Marilyn; parents and many of his siblings & their spouses.

Offer Condolence for the family of Clem A. Pieper