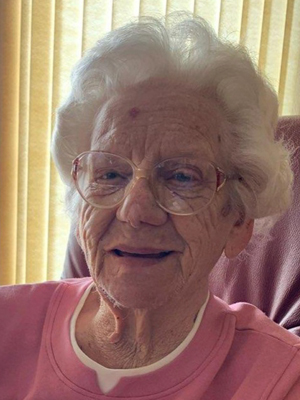 Catharina (Cathy) Theresia Veldhuis, age 95 of Prior Lake, passed away on October 25, 2021. A visitation will be held at 9:30 AM on November 17, 2021 followed by a Mass of Christian Burial at 11:00 AM at St. Michael Catholic Church, Prior Lake. Cathy will be laid to rest at St. Michael Catholic Cemetery. Father Marty Shallbetter will preside. Urn bearers for Cathy will be her daughters, Ann Marie, Janet, and Sonja. In lieu of flowers, memorials are preferred to be distributed to charities by Cathy’s family.

Cathy was born on February 19, 1926 in the small town of Oldenzaal, Netherlands to parents Hermanus Gerardus and Johanna Theresia (Mazeland) Nieuwland. Cathy was the youngest of eight children, six girls and two boys. Cathy’s family endured the Nazi occupation of the Netherlands during World War II which had a profound impact on her throughout her life. As a young woman, Cathy became an accomplished seamstress and skilled knitter. She has created countless sweaters, blankets, scarves, and hats which are still in use today.

In her late teens she met a young man, Hendrikus (Henk) Jon Veldhuis who turned out to be the love of her life. In the years following the war, Henk traveled to the United States as a participant in an exchange program to learn a trade and upon his return he convinced Cathy that America was where they should seek their future. Cathy said yes, and the couple exchanged wedding vows at the Basilica of St. Plechelmus in Oldenzaal on September 23, 1954. They arrived in Minnesota on July 11, 1956 with a 6-month-old baby in tow. The young couple eventually settled in Prior Lake where they raised their family.

While Henk worked to provide for the family, Cathy worked to raise their six children. After moving to Prior Lake, Cathy kept the kids busy with chores both inside and outside the house. Cathy was a tremendous cook and baker. Sunday dinner roasts, homemade soups, banana breads and apple bars filled her kitchen with wonderful aromas on a regular basis. In 2014, at the age of 88, Cathy entered the Minnesota State Fair for the first time and she came away with a First prize blue ribbon for her shortbread cookies!

Cathy was the “Navigator” for the family, providing both emotional support for the kids and as the guide for Henk while riding shotgun on the many sightseeing trips across America. She always knew where we were headed and kept everyone on the right path. In retirement Cathy and Henk loved to winter in Texas and visit the North Shore in the summer. They liked to walk on the beach in Texas and at Cleary Lake Park or the Mall of America, as well as ride their bikes on the Cannon Valley Trail. Cathy was a bit of a card shark and was always up for a game of cribbage or euchre. Cathy also had the gift of gab and was well known for her quick smile, a friendly greeting and stories about the Netherlands and the War.

Offer Condolence for the family of Catharina “Cathy” Theresia Veldhuis