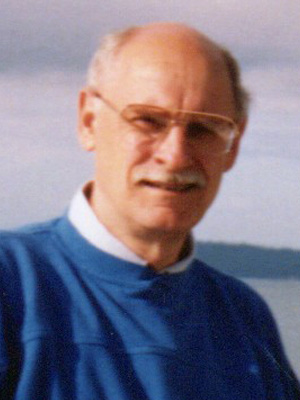 Bob was born October 26, 1934, in Savage to George and Anna (Walsh) Schneiderhan, the youngest of their four children. The 12+ year age difference between Bob and his nearest siblings ensured his special status as the much beloved “baby brother” in the Schneiderhan family.

His dad’s railroad career moved the Schneiderhans between Savage and Beaver Creek, MN, several times. In both locales, Bob enjoyed the small town pleasures of fishing in the summer, hunting in the fall, and the thrill of regular train rides to the big cities of Sioux Falls and Minneapolis for movies and fun.

Bob showed an early musical talent that was nurtured by his family. He mastered the trumpet and performed in bands from elementary and high school through his military service with the U.S. Air Force Band to summer performances with the Bloomington Community Concert Band.

He graduated from Beaver Creek High School, attended St. Thomas College, and served his country for four years as a member of the U.S. Air Force posted in exotic and diverse locales from Greenland to Las Vegas.

While still in the U.S. Air Force, mutual friends introduced him to a beautiful young woman from Prior Lake — Maureen McCutcheon. Lots of dates and dances at the Spring Lake Ballroom led to a love match, a wedding on April 7, 1956 at Saint Michael’s Church in Prior Lake, and a marriage that would span almost 64 years. During that time, they made homes in St. Louis Park, Bloomington, and eventually Savage – each a welcoming and warm place where they entertained family and friends.

Bob found fulfillment and success as a sales executive with several Twin Cities-based companies, spending the last part of his career with Northport Engineering. He made quick and lasting relationships with his work colleagues and clients alike.

Vacations found Bob and Maureen packing up a pop-up camper and later an RV to crisscross the country enjoying the sights of both major cities and national parks. Issues of Gourmet magazine informed many of their stops in New Orleans and the Southwest, which later translated into menus they would re-create and share with lucky family and friends.

Throughout his life Bob needed nothing more than Maureen at his side, a good round of golf, and the opportunity to discover a new restaurant to add to their list of favorites. Each decade held a special place they called their own – from La Casa Coronado in the 1970s to more recent haunts of Ciao Bella, Prima’s, Kincaids and the Chianti Grille, where they always made fast friends with appreciative wait staff.

Family was a priority and Bob made time for the everyday happenings and important milestones in the lives of everyone he loved. He had close and loving relationships with his parents and all of his siblings, especially his sister, Rosemary. Bob loved Schneiderhan and McCutcheon family gatherings. He loved the fun, the food, the laughter, the games, the storytelling, and the occasional political debate. His nieces and nephews came to count on him to be in the stands at a big game, in a seat at their concert or play, or offering a pat on the back at their graduations. He could be counted on to dance at their weddings, hold their babies, and applaud all their successes. He was also there on the tough days, when worlds collapsed and hearts were broken and needed mending. Each one has an “Uncle Bob” story that offers a glimpse into who he was and the difference he made in their lives.

Friendships mattered to Bob. And, he and Maureen cultivated some special friendships over the years. But none was more cherished than the “coffee friends” that formed when a group of strangers connected at Barnes and Noble over a mutual love of books, good conversation, and Starbuck’s. This special group of friends became very dear to Bob and Maureen as they met for years — every Monday through Friday — until his death.

A gathering of family and friends is on Friday, January 10, at St. Michael’s Catholic Church, 16400 Duluth Ave SE, Prior Lake. Visitation: 9:30 am. Mass: 11 am. Luncheon at 12 noon, followed by burial at Calvary Cemetery, Jordan.

Bob would love nothing more than to have you remember him by swinging a golf club on the first day of spring, ordering a favorite meal at a favorite restaurant (order an extra basket of bread in his honor), or sharing a laugh with a family member or good friend.

Offer Condolence for the family of Bob Schneiderhan