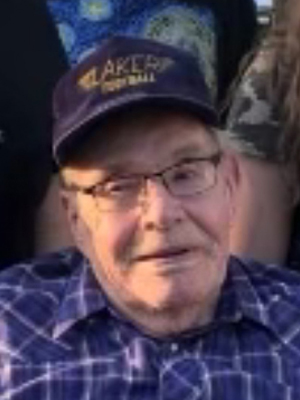 William “Bill” P. Klingberg Jr, age 83, of Prior Lake, MN, passed away peacefully and on his own terms the early morning of Saturday, July 10, 2021, at his son’s home in Shakopee, MN.

A visitation will be held on Friday, July 16, 2021, from 4:00-7:00 PM, at Ballard-Sunder Funeral & Cremation, 4565 Pleasant Street SE, Prior Lake and on Saturday, July 17, 2021 from 10-10:45 AM, followed by a Celebration of Life, at 11:00 AM, at St. Paul’s Lutheran Church, 5634 Luther Road SE, Prior Lake. Pastor John P. Vaughn will preside. Pall bearers for Bill will be Joseph William Klingberg (grandson), Jordan Hahn (grandson), Joel Klingberg (cousin), Erik Rhode (God son and nephew), Steve Klingberg (nephew), Rich Stahura (nephew), Rick Kes (nephew) and Rycky Kes (nephew). Bill will be laid to rest at St. Paul’s Lutheran Cemetery, next to his wife, Nancy.

William and Ida (Mueller) announced the birth of their first born, William Paul Klingberg Jr, on April 27, 1938. Born on the family farm in Prior Lake, he later welcomed five more siblings, Eugene “Gene”, Marilyn, Linda, Cynthia “Cindy” and Gale “Buck”. In high school, Bill would drive school bus for his dad and also accepted a position at the local filling station. He worked mostly to buy parts and gas for his cars. Bill loved racing with his friends in Prior Lake, resulting in the need of new tires, more gas and engine repairs. He was so proud to be a charter member of the local hot rod club of the time. Bill was given the nickname “Twig” because he was tall and slender. Bill had fond memories of racing for Pinks (car titles), and with never losing a race.

After graduating from Prior Lake High School, Bill enlisted in the United States Army Reserves. Once, completing his six-year commitment as a Gunnery Sargent, Bill then attended Dunwoody Institute. After earning an electrician license, he spent the next 60 plus years as a member of IBEW. Throughout his career, Bill was the ‘go to guy’ for projects, even if he was color blind. He did his work proudly and well. He was fortunate to work on large projects like ones at the Mall of American and Carlson Towers, and even spent a year in Montana, working on the Big Sky Ski Project.

Life was enriched for Bill after meeting a gal who would patronize the gas station, where he worked. Her name was Nancy Lee Weninger. Eventually, they started courting and after a movie one evening, Bill proposed, and Nancy said “Yes!” The love story was sealed with a kiss, as they married on May 9, 1959, at Holy Spirit Catholic Church, in St. Paul, MN. Bill and Nancy built a home in Prior Lake in 1960, where they raised two sons, Mark and Michael. The Klingberg family enjoyed camping and exploring most of the Minnesota State Parks, and even ventured to Alaska, which became their favorite camping destination. Even after Bill and Nancy retired, they continued camping.

Family was most important to Bill. He treasured Saturday nights eating fried chicken at the Hollywood Inn with Nancy. Sunday’s the family would gather around the table, devour a meal prepared by Nancy, and enjoy each other company. Nancy loved hosting family and friends, and Bill was always right at her side. Bill enjoyed campfires, and visiting Billy Muelken’s resort in Ignace, Canada. His biggest achievement was becoming a papa to 5 grandchildren and in recent years a great grandpapa. The grandbabies were Bill’s everything!

Offer Condolence for the family of William “Bill” P. Klingberg