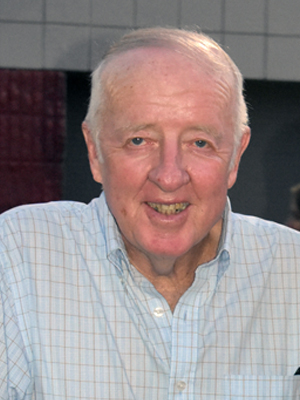 Friends over the age of 65 and/or with compromised immune systems are encouraged to watch the live streamed mass by visiting stmichael-pl.org and clicking on the Live Streaming tab. For those attending in person, a mask is required for the health & safety of our community.

Memorials are preferred and will be distributed to charities by the family in Bernie’s honor.

On November 22, 1944 in Bismarck, ND, Bernard James Carlson was born to parents Bernard and Margaret (Kuhn) Carlson. He was one of seven children. The family lived briefly in North Dakota before settling in Bowdle, SD, where Bernie attended school.

Following his high school graduation, Bernie continued his education at St. John University. After earning a degree in accounting and economics, Bernie joined the work force. He worked as a CPA with Arthur Anderson’s before entering the United States Army. While Bernie was stateside for a few years, he later served his county in Vietnam as an officer for a signal corp. During this time, Bernie was awarded a bronze star.

Upon returning to Minnesota, Bernie continued his work as a CPA for the Minneapolis Public School System and later worked as the Director of Finance for the City of St. Paul. In 1981, he resigned and began the most enriching part of his career—that of being a business owner. Starting out in Shakopee with the OK Hardware store, Bernie would later own and operate hardware stores throughout the metro. Carlson Hardware would later become a family business. Bernie felt so fortunate to work alongside his children and grandchildren!

On July 5, 1969, Bernie was united in marriage to Ethel Job at Sacred Heart Catholic Church in Freeport, MN. They were blessed with four children and 51 years together. A caring man, Bernie was always supportive of his children’s activities and sports. Bernie and Ethel would later move to Prior Lake to be closer to their children and grandchildren.

In his free time, Bernie enjoyed boating on Prior Lake with his family and was an avid golfer. For many years, work prevented Bernie from spending too much time on the course. In 2000, Bernie and Ethel began wintering in Brownsville, TX, where Bernie made up for lost time on the golf course. He was also a member of the Prior Lake VFW and active in the community.

Offer Condolence for the family of Bernie Carlson