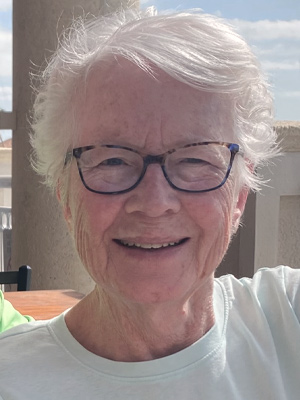 The family will be holding a private celebration of life service. Condolence cards can be mailed to Ballard-Sunder Funeral & Cremation, 104 West First Street, Jordan, MN 55352 and will be passed on to the family.

On May 3, 1943, in Aberdeen, SD, Barbara Ann was born the third of six children to Vinton and Marlus (Hatcher) Gabel. Her life was enriched by marrying Gary Anderson on April 24, 1965, in St Paul. MN. In the spring of 1967, they settled down in Shakopee, MN, where they raised two precious daughters, Laurie, and Jacki.

Family was most important in Barb’s life. She was blissfully married for 57 years to Gary and together had many great adventures. A devoted mom, grandma and great grandma, Barbara valued her time with each one and enjoyed being active in their lives. They were her world and loved them all deeply.

Barbara led a simple life. Most of her career was spent in the insurance industry. When Barbara wasn’t with family, she could be found with close friends.

Barbara was welcomed home in Heaven by her parents, Vinton and Marlus and brothers-in-law, Guido Hohenecker and Harold Guthmiller.

Offer Condolence for the family of Barbara Anderson