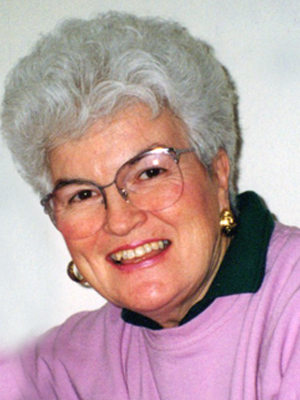 A visitation will be on Monday, July 1 from 3-7 pm and on Tuesday, July 2 from 9:30-10:45, followed by a Mass of Christian Burial at 11 am, all at St. Michael Catholic Church, 16400 Duluth Avenue SE, Prior Lake. Father Tom Walker will preside. Pallbearers will be the oldest grandchild from each of her children; Holly Ziebarth, Emily Muelken, Amanda Kaiser, Maria Traxler, Tom Fix, Jack Kaiser, Ashley DeMarais, and Morgan Nawrocki. Audrey will be laid to rest at a private family interment at St. Michael Catholic Cemetery.

Roman Frederick and Louise Mary (Lenzmeier) Luce proudly announced the birth of Audrey on July 5, 1938, at their home in Prior Lake, MN. She was the 6th of 9th children. Audrey graduated from Shakopee High School in 1956. While working as a waitress at the Spring Lake Dance Hall, she met Clarence “Clancy” Kaiser. Their love flourished and they were married on February 23, 1957, at Holy Family Church, in Mason City, Iowa. Audrey and Clancy became the proud parents to eight children, Rita, Renee, Randy, Linda, Lisa, Rory, Rhonda and Robin.

Besides being a wife, mother and grandma, Audrey worked side by side with Clancy for years, starting, owning and operating Clancy’s Bar and Pizza since 1982. She was the driving force of a successful business. Audrey was instrumental in creating the menu, and she ran a strict and spotless kitchen. In 2003, she and Clancy retired, passing on the torch to their sons, Randy and Rory.

Audrey and Clancy spent winters at Stonecrest in Summerfield, Florida. She remained very active in the community by joining the choir, playing water volleyball and golf, crafting, dancing, and most of all, socializing and creating longtime friendships.

Audrey had a strong faith in God. She was always involved in the life of the parish. Audrey felt extremely close to the Lord, especially when she received the Eucharist.

Although faith and family were most important, Audrey also had other interests. In her earlier and mid years, Audrey enjoyed participating in a bowling league and playing golf. She took an interest in shooting sporting clays and went on to become the South Dakota State Champ, as well as competing in other national tournaments. Audrey also enjoyed being outdoors working in her flower and vegetable gardens. Audrey spent countless hours in the kitchen showing her love to family and friends with a variety of delicious food. Audrey also had talent in needlework, ceramics, jewelry making and basket weaving.

Offer Condolence for the family of Audrey (Luce) Kaiser