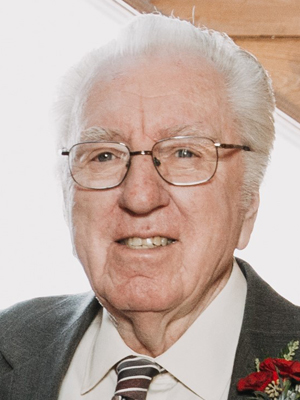 Arnold William Strehler, longtime resident of Monticello, passed away peacefully on Friday, October 5, 2018 at the age of 89. The funeral will be held Friday, October 12, 2018 at 11:30AM with a visitation one-hour prior, all at St. Peter’s Evangelical Lutheran Church, 413 3rd Street E., Monticello. Arnold will be laid to rest at Riverside Cemetery of Monticello. Pastor Darren Green will preside. Pallbearers will be Arnold’s nephews and grandchildren.

On December 9, 1928 in Corcoran, Township, Hamel, MN, parents William E. and Rosa (Tessmer) Strehler celebrated the birth of their son, Arnold. He was one of seven children.

Arnold was baptized and confirmed in the Christian faith at Salem Evangelical Lutheran Church, Greenfield, MN. His memory verse was, “One thing have I desired of the Lord, that will I seek after; that I may dwell in the house of the Lord all the days of my life, to behold the beauty of the Lord, and to enquire in his temple.” Ps. 27:4

On December 30, 1952, Arnold married Gerane M. Schumann in Mayer, MN. Their marriage was blessed with three children—Lorie, Lyle, and Lee. Oh, how Arnold loved his children with such pride and joy! Their first home was in Appleton, WI, where Arnold served as principal of St. Matthew Lutheran School. They later returned to Minnesota where Arnold served congregations in New Germany, Lester Prairie, and Delano. In 1969, they moved to Monticello where Arnold taught in the elementary public school until his retirement in 1991.

In his retirement, Arnold appreciated his time at the cabin on Maple Lake. Along with his family, he enjoyed traveling, gardening, fishing, and attending musical concerts. For over 25 years, Arnold’s favorite pastime was volunteering at the Wise Penny Thrift Shoppe in Buffalo, MN. He was instrumental in leading the Wise Penny Board to build a large addition to its original building.

Arnold had a true servant’s heart. In 1967, he was invited to serve on the WELS Commission of Liturgy, Hymnody, and Worship. He assisted in leader training workshops in the Minnesota District, participated in lecturing, demonstrating organ techniques, and performing in numerous Minnesota churches. Arnold loved music. He also played as the organist and served as choir director for numerous churches. During his teaching years, Arnold gave piano and organ lessons to both children and adults.

For several years, he served as a WELS Christian School visitor. While living in Appleton, WI, Arnold was elected to the initial Fox Valley Lutheran High School Board of Regents. He was proud to serve on the original board for West Lutheran High School now located in Plymouth, MN. A faithful member of St. Peter’s Lutheran Church of Monticello, Arnold served on various church committees.

O God, thank you for bringing Arnie to the knowledge of Jesus Christ, our Lord and Savior. Comfort us all with the glorious hope of the resurrection and the life eternal.

Offer Condolence for the family of Arnold “Arnie” Strehler