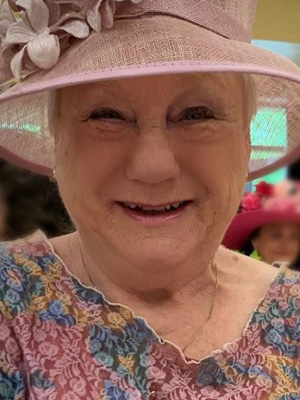 Ann Howley, age 73, of Prior Lake, MN, succumbed to her battle with cancer and passed away peacefully surrounded by her family on January 6, 2021.

A private Memorial Service was held on Friday, January 22, 2021 at 11:00 AM. Friends and family are invited to watch a recording of the service at the following link: Ann Howley Memorial Service. Due to copyright laws, we were unable to record the musical selections.

Ann was born on July 22, 1947 in Watford, England to William and Kathleen (Roffee) Dolan. The second oldest of eight children, Ann was a caretaker at an early age. She took care of her younger siblings and was willing to take charge when she needed to. Following her secondary school graduation, Ann enlisted in the British Royal Air Force, serving as an Air Defense Operator. It was here where she met Thomas Howley, her future husband, who was serving in the United States Air Force, at a small dance club, dancing to The Who. After a short courtship, they were united in marriage at St. Michael’s Catholic Church in Watford. In September of 1969, Ann moved to the United States and settled in Prior Lake, MN, where they spent eight years before going their separate ways. Once settled in Prior Lake, Ann was blessed with her two children, Sharon and Charlie. While raising Sharon and Charlie, Ann worked hard doing odd jobs while earning her degree from Dakota County Tech College in computer programming. She worked for Control Data and Blue Cross Blue Shield for many years before working at Target in the photo lab for about 10 years prior to retirement.

Ann always longed to be with people, and she developed an extremely tight-knit extended family and circle of friends while in Prior Lake. When she wasn’t working or being an amazing Mum and Nana, she could be found engaging in some sort of activity with the Sotis, Welch, or Barrie families, who were all very important to her, as well as many other families in the area. Always involved with the community in one way or another, Ann was a prominent member of the Prior Lake Players, played beer-league softball, bowled, coached soccer for many years with the Prior Lake Soccer Club, and attended all of her children and grandchildren’s events, who she loved dearly. She never missed a birthday party, band concert, or sporting event. Ann was proud of her British heritage and passed on many traditions to her family, serving things like traditional English roast dinner with yorkshire puddings and popping English crackers for the holidays which include reading stupid jokes, getting small trinkets and wearing paper crowns; all while making sure her kids were well cultured.

She is preceded in death by her father, William; and ex-husband, Thomas.

In lieu of flowers, memorials are preferred and will be donated to the American Cancer Society.

Ballard-Sunder Funeral and Cremation proudly served and cared for the Howley family.

Offer Condolence for the family of Ann Howley